Today is the Last Day of Coney Island's 2007 Season 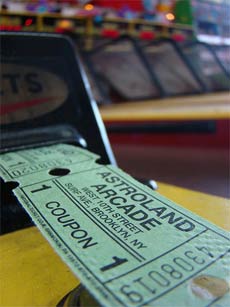 Time for everyone to say good-bye to Coney Island, as the 2007 season for Astroland's "Big Park" and Cyclone ends today (the kiddie park will be open through mid-October). And with real estate developer Thor Equities and the city battling it out over Coney Island's future, it's unclear whether the park will reopen next year.

Today at noon, there will be a demonstration to urge Thor to extend the Astroland lease. In an AP article, Coney Island Circus Sideshow founder Dick Zigun said about the potential new life for Coney Island, "Why not have a bigger, better, more exciting Coney Island?" And Community Board 13 head Chuck Reichenthal says of Thor founder Joe Sitt, "He really does understand what Coney Island was, what it is and what it can be." Still, it's unclear if the city will approve Thor's plans.

Signaling the thoughts of many people who want Coney Island to be revitalized, one Bay Ridge resident at the park yesterday told the Daily News, "I feel bad for some of the people and the businesses who may suffer, but you know what, in the long run, I think it will be good for Coney Island. Coney Island for years and years has been falling apart."

Photograph of a skeeball ticket by susiejulie on Flickr