Today In NY Times Dating Trends: A Bad Credit Score Is Like Having An STD

Yesterday while you were preparing to mix a can of tuna into a pot of Kraft mac and cheese the New York Times was fixing to ruin your 2013 resolution to Not Die Alone. According to the paper of record, actual human beings are basing their physical and emotional attractions on the arbitrary calculations of credit bureaus. The news is so shocking, one wonders why they sat on the story until Christmas Day!

Forget that Credit Score Dating is at least several years old, having a bad credit score is pretty much like having unprotected sex: you never know anything for sure until you get tested, and ignoring bills gives you a severe burning sensation when you pee.

“Credit scores are like the dating equivalent of a sexually transmitted disease test,” said Manisha Thakor, the founder and chief executive of MoneyZen Wealth Management, a financial advisory firm. “It’s a shorthand way to get a sense of someone’s financial past the same way an S.T.D. test gives some information about a person’s sexual past.”

"Shorthand" is the perfect tool for making serious decisions about your financial future as well as potential sexual partners. Rich people usually have good credit scores and they're never assholes. Also, Mr. Right likely doesn't have STDs either because he used hand sanitizer after playing nudie Photo Hunt on the Megatouch: it's a shorthand fact!

A handful of small, online dating Web sites have sprung up to cater specifically to singles looking for a partner with a tiptop credit score. “Good Credit Is Sexy,” says one site, Creditscoredating.com, which allows members to view the credit scores of potential dates who agree to provide the numbers. 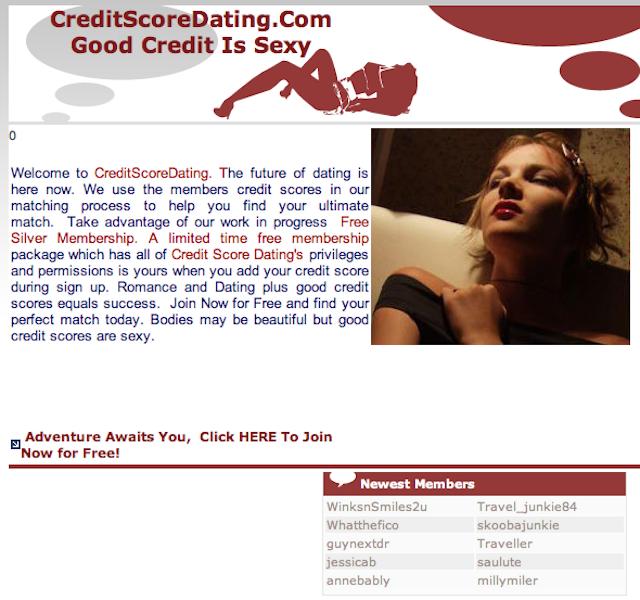 As you can see, a good credit score takes precedence over putting personal information on a website designed by the Ghost of Geocities. That 18-wheeler mudflap pinup clipart screams fiscal prudence. "Ravage me with your responsible disposition!" it beckons. "Put your signed 2012 Ford Focus lease agreement in my G-string that I bought with my Discover without added interest!"

Funny how these dating sites cited by the New York Times seem to be SEO clearinghouses for the millions of Americans who owe tens of thousands of dollars in debt and are worried about their finances to the point of paying one of the three monopolistic credit agencies to get their credit scores.

In August, Ms. La Bella recalled, while at dinner in Bayonne, N.J., a date blurted out his credit score on the first outing. Instead of making things more awkward, she said, a really productive discussion followed. Since then, Ms. La Bella tries to bring up the topic soon after meeting someone. "I take my credit score seriously and so my date can take me seriously."

No, Josephine, no one will take you seriously for scrutinizing an arbitrary number that's designed to enslave us all into indefinitely pushing the Boulder of Debt up the mountain and has no correlation on how productive or good a person is. But until humans learn how to lie, Josephine and the Credit Cupids may be on to something.

#credit score
#dating
#free credit report
#nytimes
#shorthand bullshit
#stds
Do you know the scoop? Comment below or Send us a Tip