Today at the U.N. : President Bush Speaks in AM, Ahmadinejad Speaks in PM 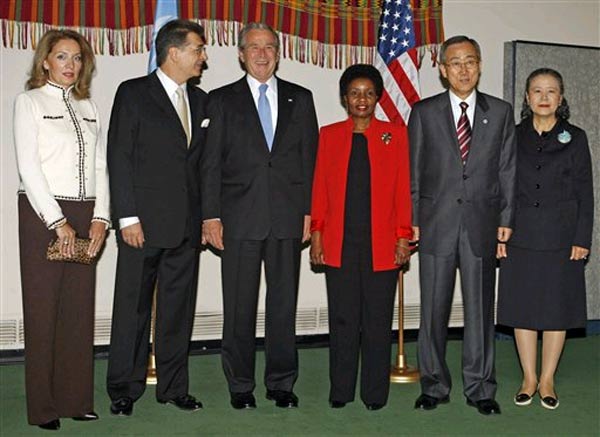 This morning, President Bush is addressing the 62nd United Nations General Assembly. He is expected to discuss "global fight against terrorism, tyranny and poverty," as well as sanctions against Myanmar in support of the protest organized by Buddhist monks. However, he will only mention Iran briefly, and will opt to cover "broad themes." A White House spokesman said, "The president wanted this speech to focus on many other issues that are facing the world -- issues that people in Sudan and Zimbabwe and Burma and countless other countries are dealing with," referring to the United Nations' mission to ensuring freedom.

Iranian leader Mahmoud Ahmadinejad, hot off his controversial appearance at Columbia University, will be speaking at 3PM. Bush and Ahmadinejad are not expected to run into each other, and the Iranian president was not invited to a world leaders reception Bush is having tonight. The White House spokesman said Ahmadinejad's invite was "lost in the mail"

Bush's speech will be carried on NY1, as well as the websites of local news networks, like WNBC and WCBS. The President has also been working on revising Mideast peace talks; yesterday, he met with Palestinian leader Mahmoud Abbas and later told reporters, "I strongly support the creation of a Palestinian state."

And, like yesterday, Midtown East is a traffic mess.