To Make Room For Imus, WABC is Getting Rid of Kuby 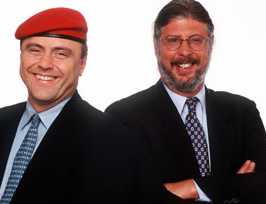 Now that WABC-AM has announced the return of Don Imus to radio airwaves starting December 3, their morning programming is shifting. In fact, Ron Kuby, who with Curtis Sliwa, co-hosted the station's morning drive program, was asked not to come to work starting today in anticipation of Imus' arrival!

Citadel Radio, which owns WABC-AM, said,"The chance to get Don is something we couldn’t pass up." According to the Times, Boyce said that he "hoped to find another place on the WABC schedule for Mr. Sliwa but did not expect to keep Mr. Kuby." Kuby appeared on The Brian Lehrer Show this morning to discuss the events - we'll have an update once it's up.

And the Reverend Al Sharpton and his National Action Network released this statement:

National Action Network has always maintained that wherever Don Imus goes back to work the company should clearly outline to advertisers and trade organization like the National Action of Black Journalists (NABJ), how they intend to safeguard against Mr. Imus returning to his former vile and biased behavior. One would think if they were sincere about his apologies and his new commitment they would enthusiastically meet with advertisers and the NABJ to voice these assurances. If they do not, then we exercise the right in the next 30-days to visit advertisers to ask what has changed since they withdrew their support to Mr. Imus’s show 6-months-ago. If there are no guarantees that the same conduct they withdrew support from will be duplicated upon his return, we will certainly act accordingly. Mr. Imus has the right to make a living but we have the right to make sure he does not come back to disrupt our living. Particularly since these are the commitments he made personally.

The Wall Street Journal says the hiring shows that radio executives believe "no proven talent is beyond redemption." And it's been almost seven months since the Rutgers basketball flap - it seems like just yesterday!