To Do: Get Arrested with Fridge Full of Weed 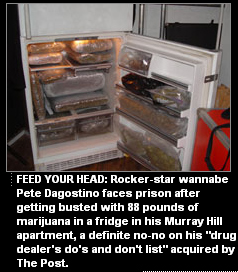 A budding Manhattan pot dealer named Peter Dagostino was arrested last year and police found a refrigerator in his apartment stuffed with 88 pounds of marijuana. They also found a list of specific "dos and don'ts" on how to succeed in the drug business. Apparently, a "don't" he forgot to add to his list was "Don't leave a written outline of your criminal enterprise for police to find." Dagostino also had some helpful advice from a fellow dealer. The New York Post explains:

Authorities also found a two-page letter from a fellow criminal acquaintance - full of juicy tips on how to not get arrested while dealing dope.

"The telephone is poison!" reads one tip by the buddy of Peter Dagostino, a 56-year-old musician and recording-studio owner.

"Leave no prints on the interior of the storage box, any packaging material or any paraphernalia," reads another...

* "Create a deceased benefactor who gave you a 'trust gift' " to hide the drug profits.
* "Have an attorney on file . . . Remember, shut the f - - - up!"
* "Insulate your business from any possible attachment by the law."

Who knew that the drug business could be so collegial? Dagostino was arrested last year, but details of the bust are becoming public since he plead guilty last month. The dealer was a 56-year-old wannabe musician and the head of The Pete Dag Band, a New York bar band. The Post reports that Dagostino had set up a recording studio called D'Place 4 Recording and B-Reel Studio to launder the profits from his drug operation or as a false front for it. He faces 2 1/2 years in jail since pleading guilty to the charges against him.