Since Uber cut its fares by 15% late last month, some drivers who work full-time on the platform say they've been extending their hours, working to the point of physical and mental exhaustion in an effort to cover their expenses.

In response to these concerns, the Taxi and Limousine Commission announced on Thursday that it plans to introduce new shift regulations in the coming months. The announcement also comes a few months after a taxi driver fatally struck an 88-year-old woman on the Upper East Side in the midst of an 18-hour shift broken up by two brief breaks.

"We have taken the first steps in using the data available to us to determine how best to combat fatigued driving," TLC commissioner Meera Joshi stated on Thursday. "Our goal in the coming months is to develop and propose rules." The TLC declined to provide specifics.

Jose, an Uber driver from Queens, worked from 9:00 p.m. on Wednesday night to 9:00 a.m. on Thursday (he asked that we use a pseudonym for fear of retaliation from his employer). Jose's take-home from the shift was $214.96, according to a digital receipt. For comparison, his average daily income for the week of July 20th was nearly twice that—$424.

At the end of each month, Jose transfers $922.53 in lease payments to Uber for his 2015 Toyota Sienna. He says that this, combined with his rent, commercial vehicle insurance, and caring for two children—plus miscellaneous costs like $30-40 in gas per shift, coffee and food on the road, and gum and candy for his riders—makes long hours a necessity.

Before Uber fares were reduced in January, Jose says he typically worked overnight from 9:00 p.m. to 5:00 or 6:00 a.m., six days a week. The additional three or four hours per day—excluding recent strike days, which he has observed in solidarity with fellow drivers—have been taking a toll. "Dunkin Donuts is like my best friend," he said. "When I can't really drive, I just park myself somewhere and I sleep for half an hour. I'd rather not deal with an accident or get sued just because I have to make ends meet." 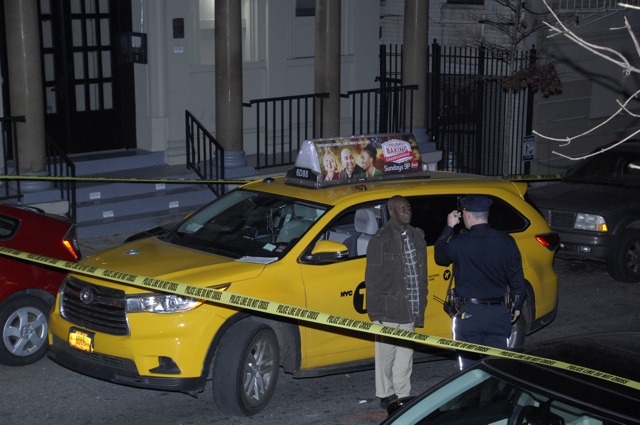 Driver Salifu Abubkar fatally struck an 88-year-old woman on the UES during an 18-hour shift in November (David Torres).

Under the current regulations, taxi drivers are prohibited from working more than 12 hours without a break. However, there is no minimum break time, freeing up drivers to pause for as little as a few minutes before getting back on the road. And even though violators are technically subject to a $25 fine, the TLC stated in November that the fine had not once been leveraged.

The Post reported this week that Uber drivers have a 100-hour weekly cap, or a little more than 14 hours per day. However, a spokesman for the company stated that drivers pushing this limit make up an extreme minority of Uber's NYC driver base.

"Barely 1% of Uber drivers in New York ever come close to the 12 hour threshold, because the flexibility of driving with Uber allows them to start work and stop work whenever they want," he said in a statement. He added that while the "overwhelming majority" of NYC Uber drivers drive fewer than 30 hours per week on average, "we do not condone even a single individual driver spending an excessive time behind the wheel, period."

Compared to the more than 30,000 Uber-affiliated drivers in NYC, the group of drivers striking for a reversal of the fare cut is relatively small (Uber confirmed this week that recent strikes didn't register any reduction in service). A rally on Sunday drew more than 200 drivers, and a recent poll on the group's Facebook page has 790 respondents as of this writing. But the vast majority of these drivers work full time, and say they are therefore disproportionately impacted by the fare adjustments.

Rosemary Cruz was a yellow cab driver before she switched to Uber a year and a half ago. She moved to Pennsylvania last fall, and commutes to and from Manhattan to drive. Days were long before the pay cuts. "Normally I wake up at 4:00 a.m.," she told us on Thursday. "I'm usually in the city by 6:15. I take my breaks here and there, and then I drive home around 7:00 or 8:00 p.m. to avoid traffic." Now, with the lower fares, Cruz says she's having trouble justifying her commute. Yesterday, she drove around to different black car services, dropping off her resume.

In a letter to the TLC acquired by the News, Uber NYC's General Manager said the company will instate a 12-hour shift limit, and enforce it by tracking drivers on the app.