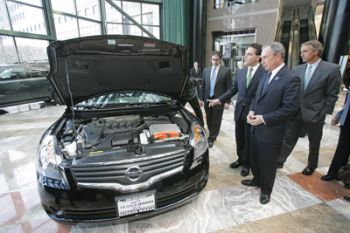 Mayor Bloomberg has announced a plan that will require better fuel efficiency for city's TLC-run black cars; the change is part of the broader PlaNYC initiative and follows in the tread marks of the new hybrid yellow cabs.

Emissions will be halved for the fleet of 10,000 black cars, which currently release 272,000 tons of CO2 equivalents annually, making up 2% of the City's transportation related emissions. The fleet is a part of the Taxi and Limousine Commission and services corporate clients (who don't want to get their hands dirty using mass transit). The cars will need to meet a standard of 25 miles a gallon in 2009 and 30 miles a gallon in 2010 (the current average is 12 to 15 miles a gallon). A Green Car Funding Corp. has been set up to provide low interest loans to ETG black car owner operators who purchase new hybrid vehicles.

The yellow cabs have a tighter deadline and are required "to meet fuel efficiency standards currently only achievable through the use of hybrid technology" by October 1st of this year. By 2012 the drivers are responsible for replacing their vehicles with fuel-efficient hybrids (there are currently 825 on the road). The change will cost them money up front but could ultimately save them up to $5,000/year on fuel. City officials are also trying to get a law passed that would waive the city sales tax on fuel-efficient vehicles.

In the first part of this step, more than 23,000 TLC-regulated cars will become more efficient, leaving a slightly greener carbon footprint. And as the TLC Commissioner and Chairman Matthew W. Daus stated, "passengers will also enjoy riding in newly purchased vehicles as well." And isn't that all that really matters?