Professional drivers gathered in Washington Heights this weekend to mourn the death of Uber driver Fausto Luna, who became the seventh New York City for-hire driver to take his own life since November 2017, when he jumped in front of a Manhattan A train last month. Luna had driven for Uber for five years and received high ratings and consistent earnings, according to a company spokesperson. El Diario reports that he was depressed over a mounting debt he was unable to pay.

Sunday's vigil was attended by a few dozen drivers, along with Taxi & Limousine Commissioner Meera Joshi. The commissioner is a frequent target of drivers and their advocates, who say that she has presided over an unsustainable influx of vehicles on city streets, and further hurt driver wages by imposing hefty fines for minor offenses. Earlier this year, US Rep. Adriano Espaillat called for Joshi to step down over her handling of the suicide crisis, blaming her for "untenable working conditions, excessive fines, and oversaturated market."

Those frustrations came to a head on Sunday. Not long after Joshi arrived at the vigil, she was shouted down, then forced to flee the site as some frustrated drivers followed her through the streets of Washington Heights.

Chanting "How many more?" and holding signs demanding Joshi's firing, a handful of drivers chased Joshi down Fort Washington Avenue, amNew York reports. She eventually retreated into the 175th Street subway station, but not before TLC spokesman Allan Fromberg fired back at the demonstrators, "You're doing this for politics."

Fromberg later told the Daily News that a group with a "very political" agenda had "hijacked the vigil with some of the most hateful and divisive language I’ve ever heard."

The small gathering was organized by the New York Taxi Workers Alliance, an advocacy group representing drivers across multiple sectors, including some Uber and Lyft drivers. According to the group, Luna is the seventh New York City driver, the first app-based driver, and the third Dominican driver to die by suicide in recent months. 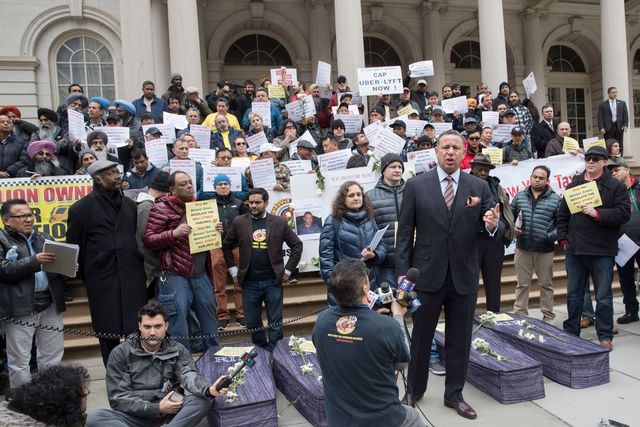 During a rally in front of City Hall last March, drivers stood in front of four caskets, representing the four taxi and livery drivers who took their own lives in recent months. Since then, three other professional driver have committed suicide. (Mary Altaffer/AP/Shutterstock)

In a statement, Bhairavi Desai, executive director of the New York Taxi Workers Alliance, lamented the "working men and women who have fallen into despair because of a business model of low pay, saturation and predatory lending spread across the globe by Uber."

"Every city needs to take a deeper look at what happens when you let Wall Street backed corporations use billions of dollars in capital to lock workers into a prison of poverty," she added. According to a report commissioned by the Taxi and Limousine Commission, the vast majority of app-based drivers make less than minimum wage.

After years of inaction, Mayor Bill de Blasio signed a sweeping legislative package this summer, which will create a first-of-its-kind cap on Uber and other for-hire vehicle licenses, while establishing a minimum pay standard among all drivers. Additional bills up for consideration in the City Council would require the TLC to provide a health benefits fund to for-hire drivers, as well as financial counseling and mental health services through "driver assistance centers" across the city.