Tips For Participating In The Coming NYC Trump Protests

The weekend is shaping up to be dominated, in terms of news coverage and psychic space, by the inauguration of Donald Trump as president, and a lot of people seem intent on doing something other than binge drinking and screaming into a couch pillow in response. For those New Yorkers who are motivated to demonstrate, but can't make it down to Washington, DC to protest, there are some options here at home.

On Thursday evening at 6 p.m., a coterie of celebrities, marquee activist groups, and Mayor Bill de Blasio are planning to rally in front of Trump International Hotel and Tower. Attendees are set to include de Blasio, Alec Baldwin, Michael Moore, Rev. Al Sharpton, Mark Ruffalo, Rosie Perez, and Shailene Woodley, as well as organizers from MoveOn.org and Greenpeace.

I plan on engaging in #civildisobedience this Fri near Trump towers. Let me know if your down. @realDonaldTrump #ResistTrumpFromDay1 #MLK

On Friday, around the time of the inauguration, several lawmakers and activists are planning to stage an act of civil disobedience near Trump Tower as an expression of opposition to Trump's cabinet appointments, his xenophobic immigration policies, his support of implementing stop-and-frisk nationwide, and the repeal of the Affordable Care Act. Announced participants include Councilman Jumaane Williams, newly elected state Sen. Marisol Alcantara, and Kirsten Foy of Rev. Al Sharpton's National Action Network. The direct action, scheduled for noon to roughly coincide with Trump's swearing-in, will follow an 11 a.m. press conference.

Later on Friday, a coalition of socialists and occupiers is hosting a rally and march starting in Foley Square at 5 p.m. The planned destination: the Trump Building on Wall Street. 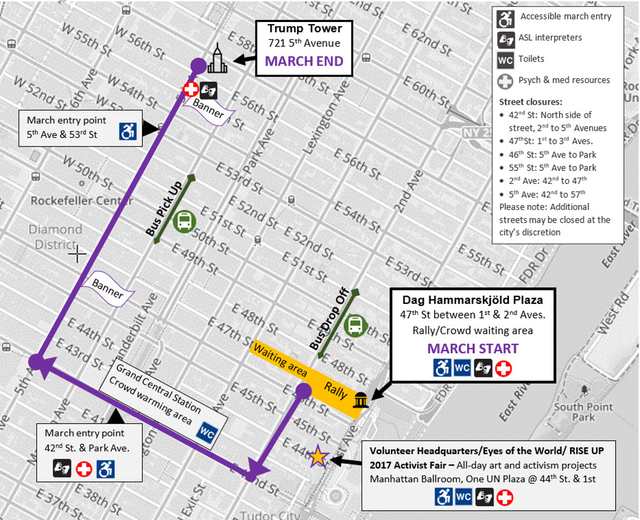 What's likely to be the biggest demonstration by far is Saturday's Women's March on NYC. In the works for months, the permitted march to Trump Tower is set to begin on Saturday at 11 a.m. with speeches at Dag Hammarskjold Plaza (First Avenue at East 48th Street). More than 49,000 people have said they are planning to go on Facebook, and organizers have said they anticipate as many as 100,000, so the march is set up to be highly regimented, including staggered march times, portapotties, sign language interpreters, volunteers to push people in wheelchairs, and medics and emergency therapists along the route.

The Women's March website has much more detail on how to figure out when your segment of the march is supposed to leave, but the short version is that if you go without registering with the organizers or telling Facebook/the FBI that you're going, they want you to come at 4 p.m.

By the looks of it, the New York Women's March will be an extremely stage-managed affair—remember, it's "not anti-Trump. It’s pro-equality"—as is likely the case with the two prior events sponsored by elected officials, so the odds of police cracking skulls and anarchists getting buck is probably—but not necessarily—lower. For those weighing the likelihood of arrest/injury, it's also worth keeping in mind that at un-permitted demonstrations, among many other possible responses, the NYPD can decide to declare a gathering of four or more people an "unlawful assembly" and arrest those who remain, charging them with a misdemeanor.

The National Lawyers Guild's New York City chapter will be operating its protest legal support hotline—(212) 679-6018—Thursday, Friday, and Saturday. The hotline is meant to help provide jail support and identify first-time legal counsel for arrested protesters. Chapter executive director Susan Howard stressed that the hotline is to report arrests, not for demonstrators seeking "general info." She added that her group would have volunteer Legal Observers, who monitor police behavior and arrests, out at the protests, though she was not sure how many.

"We expect to have good coverage!" she wrote in an email.

For those planning to go to one or more of the protests, here again is our handy guide on what to bring, and how to prepare, as provided to us by Black Movement Law Project co-founder Abi Hassen, with a few updates for this event:

Disclosure: The author worked for the National Lawyers Guild for two years, and in that capacity Abi Hassen was a colleague of his.

#donald trump
#first amendment
#inauguration
#know your rights
#nypd
#occupy
#protest
Do you know the scoop? Comment below or Send us a Tip