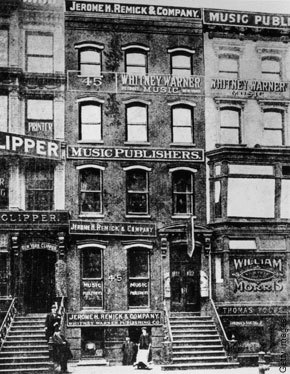 Now might be a good time to take a look at Tin Pan Alley, because The NY Post reports that "the birthplace of American song" has become a real estate commodity. Dating back to 1885, when music publishers came to the area, Tin Pan Alley kept the music going through the 1950s--and in the eyes of many should be preserved.

Much to the dismay of tenants and preservationists, five of the buildings on West 28th Street between Broadway and Sixth Avenue - a block that for 60 years was the heart of the songwriting industry - have gone up for sale.

The information was posted on Lost City yesterday, who pointed towards a Loopnet listing that recommends the buildings, all well-maintained 4-story brownstones, be demolished in order to open up 111,000-sq-ft of Prime Chelsea property. The listing even comes complete with a soulless rendering of a highrise. Simeon Bankoff, executive director of the Historic Districts Council, told the paper that "It's a very, very disturbing prospect. These buildings are incredibly significant to the development of New York City. They helped launch the careers of songwriters and musicians who are still popular today."

In 2003 the NY Times took at look at Tin Pan Alley, talking to a longtime resident of No. 47, Ms. Ekman, whose apartment floors sloped a radical five inches. "She thinks the future of the row is not a real estate question, but an engineering one ''It's just a question of how long they can stand up'' she says." Today some of the tenants, who currently pay approximately $1,000 a month for 1,000 sq-ft, have hired a lawyer and plan to ask for $1 million per apartment.

#development
#real estate
#tin pan alley
Do you know the scoop? Comment below or Send us a Tip