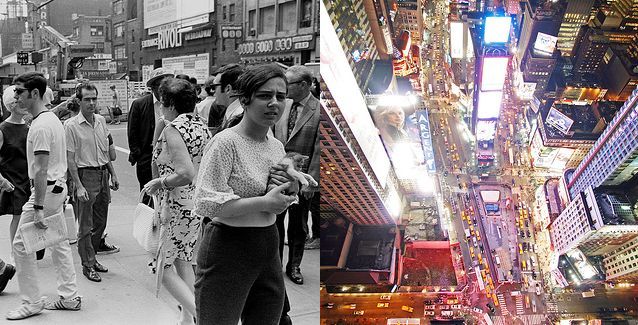 The Times's neato "Then/Now" series, which always features two comparative photos of the same NYC location, past and present, concluded yesterday, having compared 16 views of the city 30 years ago with identical contemporary views. Today's view is of Times Square, looking south on Broadway from 50th Street to roughly 45th Street. As you scroll your mouse over the website's black and white photo from gritty '79, it transforms into the banal, supersize corporate ad vortex of today.

Columnist/photographer David Dunlap notes that at dead center in the article's 1979 photo sits a giant billboard of Frank Langella, who was at the time starring in a movie version of Dracula. And today he can be seen as Richard Nixon in Frost/Nixon, so not much has changed there, ha ha. Other things are strikingly different; in the Times's photo Rocky II is screening at the Cinerama duplex, which opened in 1914 as the Strand, regarded by some historians as the first true movie palace. That's now been replaced with Morgan Stanley headquarters.

And the "Doric temple" which featured a James Bond billboard in '79 was the Rivoli Theater; that was later razed to build the 750 Seventh Avenue office tower, where Ruby Foo’s has a restaurant. Progress! In concluding the "Then/Now" series, Dunlap urges readers to look for it again "in 2038 as 'Way Back When/Then/Now' — in some medium that cannot be imagined today." We say boo. This series was brilliant, and with this city's turbulent rate of change, surely the Times can revive it in less than three decades, when the Big Apple will probably be renamed The Big Duane Reade.