A man who detonated a pipe bomb during rush hour in the subway station underneath the Port Authority Bus Terminal last year has been found guilty of terrorism charges.

Akayed Ullah, 28, was wearing a pipe bomb strapped to his body when he detonated it inside the passageway connecting the Times Square and Port Authority subway stations on Dec. 11th, 2017. He injured himself and one other person (who was wounded by shrapnel). The explosion filled the terminal with smoke, and sent panicked commuters running from the scene. Ullah, an electrician and Bangladeshi immigrant, later claimed he was inspired by the Islamic State, and had spent a year plotting his attack. Authorities added that it was the first attempted suicide attack in NYC since September 11th. 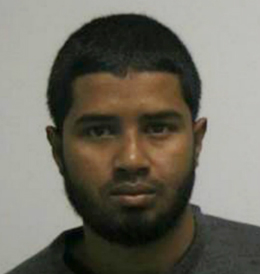 Ullah's attorneys admitted that Ullah detonated the bomb, but argued that it was a suicide attempt: “He wanted to die," said Amy Gallicchio. "He wanted to take his own life. And only his life." Prosecutors painted a picture of a "cold and calculated" man deadset on killing other people: “The defendant detonated a shrapnel-filled bomb in the middle of the busiest subway station in the United States during rush hour," said prosecutor Sean G. Crowley. "He did it to terrorize, to injure and kill."

Earlier this week, the NY Times ran a remarkable piece tracking Ullah's movements on the day of the bombing using security camera video pulled from numerous cameras along his route.

Ullah has now been convicted of using a weapon of mass destruction, bombing a public transportation system, conducting a terrorist attack and other counts. He could face life in prison at sentencing.

U.S. Attorney Geoffrey S. Berman said in a statement: "Late last year, Akayed Ullah detonated a bomb during the bustle of morning rush hour under the Port Authority Bus Terminal. Ullah’s sinister purpose was to harm and terrorize as many innocent people in his path as possible, by using deadly violence to make a political statement. Ullah’s conviction by a unanimous jury of New Yorkers falls on an Election Day, which fittingly underscores the core principles of American democracy and spirit: Americans engage in the political process through votes, not violence. Today, Ullah stands convicted, he faces a potential life sentence, and his purpose failed. New York City remains a shining symbol of freedom and hope."