[UPDATE BELOW] Cantankerous NY Post columnist Steve "He Who Yells At Cloud" Cuozzo is OBSESSED with the Times Square pedestrian plaza, which he says "gutted" Times Square's "unique energy," and turned it into "a campground for mostly low-spending tourists." Since the plaza debuted in 2009, "Yells At Cloud" has ranted about it with a virulent single-mindedness that makes Ahab look like Silent Bob. It is Cuozzo's white whale: He piles on the plaza's capacious hump "the sum of all the general rage and hate felt by his whole race from Adam down; and then, as if his chest had been a mortar, he burst his hot heart’s shell upon it." And you didn't think we'd close out 2011 without one more harpoon for the road? 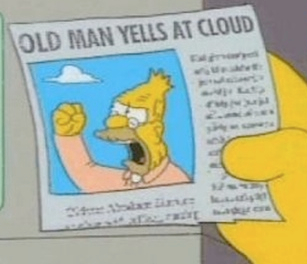 This one is a bit of a stretch, but Cuozzo's contempt has made his mind limber! He finds his angle in the last two pages of a year-end report from the New York Economic Development Corporation [EDC], which provides a rosy overview of various Bloomberg initiatives. At the end, dynamic photos (above) depict Times Square surging with motor vehicle traffic, back before the pedestrian plazas were created. Obviously, this means the EDC—and probably even City Hall—are secretly ASHAMED of the changes, Cuozzo contends. Now, maybe some sheeple think this stock photography doesn't signify anything, but they probably never got swallowed up by a pedestrian plaza and lost a leg. Let Cuozzo read the tea leaves:

[The report] is full of photos of new developments and renderings of those in the planning stage. Yet, the Times Square photo, the largest in the 60-page brochure, is three years old. How ridiculous is this, days before the world’s eyes will be focused on the New Year’s Eve ball drop at 1 Times Square? Why would EDC sneak an embarrassingly out of date photo into a promotional brochure highlighting the future?

Was there no room in EDC’s $828,598,925 annual operating revenue to hire a photographer to take fresh shots? We’ll hazard a guess. Three years ago, Times Square still possessed the unique, visible dynamism that was annihilated by the installation of tacky plazas in 2009... And City Hall itself just might have a qualm. The EDC’s choice of an old Times Square photo suggests an awareness that something’s been lost — a brand of urban energy that throngs of bench-hogging tourists can’t put back.

So no, there isn't actually any real news here, and you get the sense that the "something" that's "been lost" might just be Cuozzo's mind. It probably doesn't help that the Post headquarters is a block away, forcing him into regular contact with a place "New Yorkers once regarded with a mixture of love and hate," which is now, in his words, "one that natives avoid, except those obliged to work there." Speaking for ourselves, we avoided Times Square as much before the pedestrian plaza as we do now.

A spokesperson for the EDC declined to comment, probably because there's just no reasoning with Ahab once he gets an idea in his head. But had the EDC paid for a photographer to shoot the new Times Square plaza, instead of using pre-existing stock photography, Cuozzo probably would have been just as outraged over a waste of taxpayer dollars on flashy plaza propaganda! We reached out to Bloomberg's press office for comment on Cuozzo's speculation that the photos "suggest" City Hall has "a qualm" with the plazas, and we'll update when we hear back.

In the meantime, we suggest you stare deep into these photos of the pedestrian plazas... If you cross your eyes just right they become three dimensional, and you can clearly see that gaping maw opening up in the earth to devour NYC's once-vibrant soul, right there by the intersection of Broadway and 46th.

Update: An EDC spokesperson sent us this statement in response to Cuozzo's feeling that "something's been lost": “Times Square has never been more popular throughout its long history among tourists and employers alike. Despite global economic trends, vacancy rates remain low and average rents are steadily increasing, solidifying its place as one of the most desirable destinations for businesses and retailers in the entire world.”

#moby dick
#pedestrian plaza
#steve cuozzo
#Times Square
Do you know the scoop? Comment below or Send us a Tip