A Times Square hardware store is taking heat for the bizarrely sexist signs it habitually posts in its windows.

Schacht Electrical Supply, located on 39th Street, boasts a rotating display of questionable aphorisms, ranging from “Women have really good taste in money,” to “Women decide your nickname after sex," the Daily News reports. Customers told the tabloid the store has been posting its one-liners since 2011, though they're not "always geared to women," one insisted.

Not always! But often enough for Emily Holman, who works nearby. “It’s very disrespectful. I’m actually surprised there hasn’t been more of a reaction, more outrage,” she told the paper.

The signs read like something you'd find carved into an oak slab and hanging in the garage of so many Ohioan grandparents, or like vaguely misogynistic fortune cookies. Speaking of which: "Offering a guy a hand job is like offering a baker a cupcake." Inspiring! 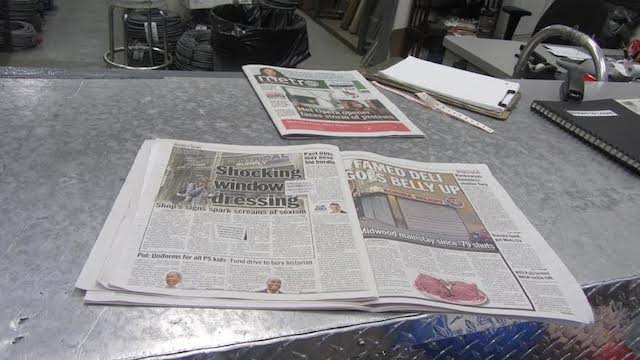 Longtime employee Marcus Padilla told Gothamist that the allegations of sexism are "BS," and adds that he's annoyed the media has chosen to shower attention on their witticisms when there are other, more important signs hanging as well: The store is also advertising a raffle to benefit an unidentified 3-year-old girl with brain cancer.

Crystle, a regular customer from Brooklyn, tells us she doesn't quite get the kerfuffle. "My standpoint is, we live in America and we have freedom of speech—if you don’t like it, don’t look at it," she said. "They’re not throwing acid on women.”

Or, as one of the signs endearingly puts it: "When a woman says she doesn't want to talk about it, you'd better get ready to shut up and listen." A customer, who didn't want to share his name, insisted that the sign was merely dropping some important truths to help customers better understand the problem of women, as a species. “Personally, as a married man, I know that when a wife says they don’t want to talk about it, you’re gonna have to hear it,” he said. “It’s not malicious."

Customers and passersby will probably have to go back to learning about women and relationships from other sources, since Padilla says they're going to stop posting the signs. “If it’s going to cause issues, why bother?” he said.