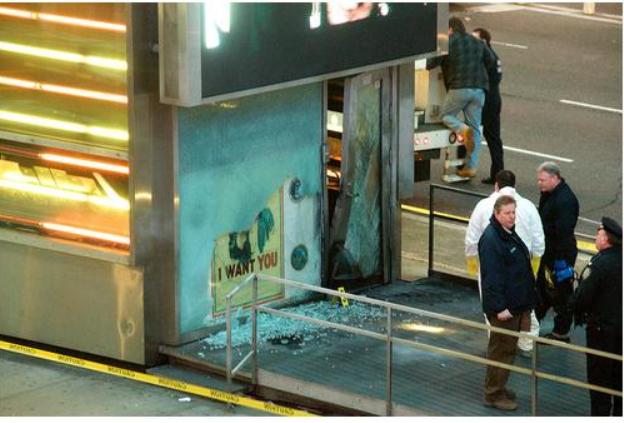 Around 3:45 a.m., a device exploded outside the military recruiting center in Times Square. No one was injured, but a glass entryway was shattered.

The streets around Times Square were shut down (now traffic can pass through) and subway service passed through the Times Square station without stopping (it's back to normal now), as authorities investigated the scene. WNBC reports police were searching for a "suspect seen on a bicycle fleeing the scene after the blast" - a witness saw a man wearing a grey jacket with a hood "pulled tight with a drawstring" heading south.

According to WABC, police say the device was an improvised explosive, a "green ammunition can" with a low level of explosive. A hotel guest at the Marriott Marquis nearby said, "I was up on the 44th floor and I could feel it. It was a big bang," while another said, "It shook the building. I thought it could have been thunder, but I looked down and there was a massive plume of smoke so I knew it was an explosion." 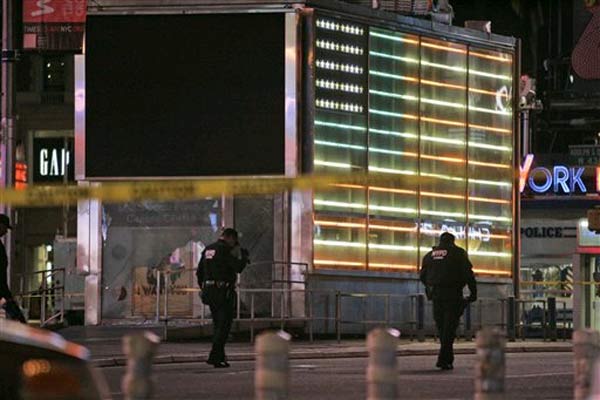 Captain Charlie Jaquillard, commander of recruiting in Manhattan, said, "If it is something that is directed toward American troops, then it's something that's taken very seriously and is pretty unfortunate," he said. The recruiting center, in the heart of Times Square at West 43rd Street and Broadway, has been the site of many protests, from the Granny Brigade to 2004 Republican Convention events.

Last October, grenades were thrown at the Mexican consulate, and, in 2005, an explosive was set off outside the British Consulate.

Update: During a press conference, Police Commissioner Ray Kelly mentioned the witness's account, "The [suspect] (on the bicycle) was wearing a hood and dark colored clothing, also carrying a backpack. He did not see the individual’s face." And Mayor Bloomberg said, “Whoever the coward was that committed this disgraceful act on our city will be found and prosecuted to the full extent of the law. We will not tolerate such attacks."