The city is moving forward in its push to tightly control pedestrian plazas, just as the season's first warm weather saw an influx of desnudas and costumed characters in Times Square: a bill introduced in the City Council yesterday would give the Department of Transportation the ability to regulate and oversee the activities that take place in pedestrian plazas.

It's a seemingly small amendment to the city's administrative code, but would pave the way for Mayor de Blasio's Times Square task force to relocate citizens legally engaging in public nudity and accepting tips to "designated activity zones."

Currently, it's not clear what city agency (if any) can regulate pedestrian plazas, as Councilmember Brad Lander, one of the sponsors of the bill, told the Observer. He said that "it's that lack of authority that means no one has the ability to write rules about the densudas in Times Square, and that was certainly part of what provoked the conversation that got us here."

The other factor that provoked that conversation? The Daily News, which published a series of prim-yet-salacious articles last summer against Times Square's desnudas. After about the 872nd article on the painted naked ladies, de Blasio finally promised a crackdown on desnudas and costumed characters who pose for tips, while somehow abiding by that "thorny" First Amendment. 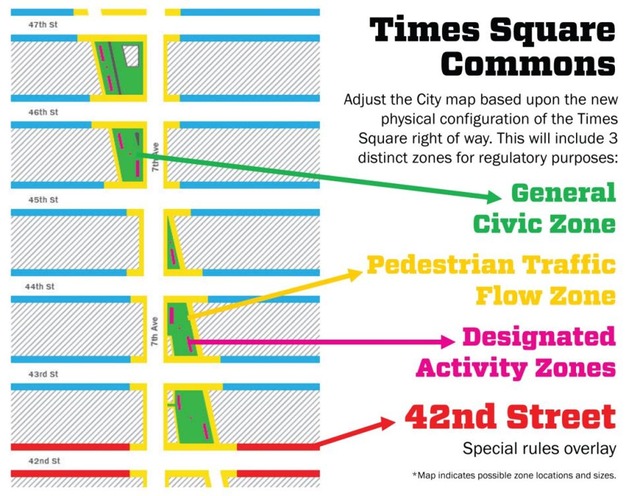 The Times Square Commons, proposed last fall by Lander and Councilmember Corey Johnson (who both sponsor this new bill), would limit the constitutionally-protected acts of posing for tips while in costume or topless to special activity zones in Times Square's pedestrian plazas, distinct from the "general civic zones" and "pedestrian traffic flow zones." But that gets into some tricky legal territory, as civil rights attorney Ron Kuby told us in October, as it seems to be a content-based, rather than a constitutionally permissible content-neutral, First Amendment restriction: rather than prohibiting all activity in a certain area at a certain time, it prohibits specific legal activities in all but a few locations.

Actually enforcing these regulations might not be so easy. Kuby said, "If you're going to sort of create different areas where people are allowed to do things and not others, I suppose you have to provide proper warning that they're entering a muppet zone, or a nipple zone...DANGER: NIPPLES PAST THIS POINT."

Johnson is hoping that the bill can have a hearing soon, so that restrictions could be in place by the summer. It's been referred to the council's transportation committee, but there's not yet a timetable in place, so there's still some time to brush up on constitutional law and make your own judgment as to whether restricting legal activity in a public place is at all justifiable.

#Costumed Characters
#department of transportation
#Desnudas
#first amendment
#times square commons
Do you know the scoop? Comment below or Send us a Tip