Luis M. was sweating when he tilted up the head on his Elmo suit to get some air. When approached by a reporter and asked how the new Designated Activity Zones/freedom pens in Times Square were treating him, he didn't hesitate:

"I feel like a fucking caged animal," he said. "Fuck the law. Fuck the system."

A passing tourist caught his eye and he broke off momentarily to call to her: "Hey, beautiful, come over here," he said. Normally, he would have followed her to try to convince the woman to pose for a picture and cough up a tip, but as of this week, police can ticket him if he plies his trade outside the confines of the white lines delineating the zone. A slender lane of teal paint within the box is the only place he's allowed to pose for a photo and take money.

Craning his neck over the edge of the box as if it were an actual barricade, he said, "You ever see those animals at the Bronx Zoo? That's how I feel."

The response was shared by most of the newly restricted Times Square costume characters we talked to. The new Department of Transportation rules for the pedestrian plazas between 42nd Street and 47th Street also apply to ticket sellers, and street performers, and also designate strips of pavement alongside the zones as "pedestrian flow zones," which officially can't be used "for any purpose other than the safe and continuous movement of pedestrian traffic."

Violations are supposed to be punishable by fines that can go up to $500, and after repeat offenses, jail time. (The City Council's Committee on Consumer Affairs approved a wide-ranging bill to license and restrict ticket-selling citywide this week, sending it to the full Council for a vote.)

All of the costumed characters that we encountered were inside one of the eight zones.

"We used to go out on corners," Rosa B., dressed as Minnie Mouse, said in Spanish. "The model was to go up to people and convince them to take a picture. Now we have to somehow try to get them to come to us."

Rosa complained that the space is too narrow to accommodate the afternoon crowds of tourists and performers. What's more, the 8x50 feet strips on 42nd have views of food stalls, not the view down Broadway that people want, she said.

The ticket sellers were about half in the zones and half out, near subway entrances and street corners. Those outside the painted lines seemed to be interpreting the rules to mean they could tell people about sightseeing tours anywhere so long as they herded their quarry back to the teal rectangle to make the final sale. One seller said even that step isn't necessary so long as no police are watching.

"Now you just have to keep walking to where there's no cops," said Daniel, a seller for New York Tours.

This approach irked some of the costume characters.

"We always try to cooperate with the city and the police," said a Spanish-speaking man dressed as Woody from Toy Story, who gave his name as Beddi. "The people selling tickets aren't doing that."

Old-fashioned panhandlers and fake Buddhist monks worked their hustles as usual this afternoon.

The new rules have already cut into most people's bottom line. Rosa B.said that she has been working the hustle for two years and has seen her take for seven hours of work go from $50-60 to around $20. Dennis Phipps, a Gray Line ticket seller hugging the square, said that before the new rules went into effect, he might take home $100-$150 on a good day, but now he's making half that.

Phipps said that the DOT can only do so much to regulate what happens in Times Square.

Indeed, in the zone at 42nd Street and Broadway, whenever, say, Minnie Mouse drew a tourist into the money strip, Elmo, Iron Man, and a Minion would go trotting over and blanket the subject, waving at friends and relatives to try to get them to join the photo. When all the camera-phones had been passed back to their respective owners, out came the tip pouches.

Ken and Lynell Vandermeer, visiting with their family from West Saint Paul, Minnesota, got roped in this way along with the whole clan and a family friend. When it came time to pay up, Ken decided to only part with a dollar, to be split four ways, prompting Luis M. to mutter as he walked away, "You see? Fuck these people!"

The Vandermeers had found New York to be surprisingly friendly thus far, but had not heard of the costumed panhandling phenomenon, or of the new system to cage it in.

"Now that I watch, I can see they're kind of aggressive," Ken said. "The box is probably a good idea." 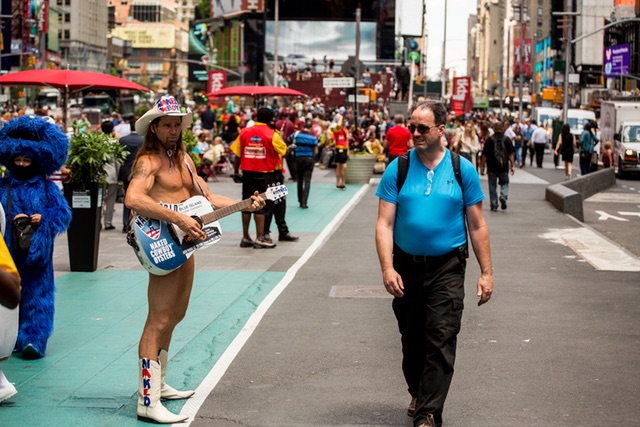 Others were more generous tippers—one man in a salmon polo shirt gave three performers $6 each—but a common payment was $1 per character.

Paul Carpenter, a nomadic magician who frequently stops over in New York, said the system is actually great, but it doesn't go far enough in defining who goes where.

The costume characters "hate me," he said. "If I do a show, they have to leave, because my show draws 100-150 people." He complained that bitter superheroes and cartoon protagonists go up to people in his crowd and try to get people to pose for pictures while he's doing his act. "I don't go up to your clients and try to do a magic trick, but you come up to mine and ask for a photo?"

The rules, he said, are a bright spot in a de Blasio mayoralty that has been brutal for street performers, defined by police stringently enforcing rules that he had not had problems with previously in his 15 years of busking, such as prohibitions on using an amplifier and drawing crowds larger than 20 in parks. Ultimately, he said, the city wants to get rid of street performers. "These laws are only there because if you're making money outside of the stores, you're not spending money in the store...They turned Times Square into a mall."

Most of the costume characters and some of the ticket sellers we spoke to said they were planning to look for new work, including in factories, restaurants, and house-cleaning.

"I think it's a tactic to get us out," said a man dressed as Deadpool, who declined to give his name. He predicted that the Times Square Alliance, a business group that pushed for the regulations, will continue to press for more rules until performers leave.

Times Square fixture the Naked Cowboy, on the other hand, embraced the new setup, saying it helped draw attention to his act. "If they give me a space the size of a Hollywood star, I'll be happy," he said. "I'll play there every day for the rest of my life."

The City Council began discussion of the law that ultimately allowed the DOT to create new rules governing the Times Square plazas last summer, amid a deluge of tabloid outrage over the painted, breast-baring desnudas, who were conspicuously absent early this afternoon, and costume-wearers fighting tourists, police, and each other. Rosa B. said the final straw was when a desnuda manager punched someone after he groped a desnuda's butt. Luis M. said it was when certain costume characters picked up tourists' children. Whoever it was, Deadpool said that the bad actors no longer come around.

Nevertheless, the rules seem here to say. Luis, the aggrieved Elmo, said that the popularity of the gig is what doomed it.

"Imagine you have a popular character, and it's just you out here and a couple of friends. It was like a goldmine out here," he said. "They fucked it up. Fucking idiots."

Luis explained that a neighbor in Passaic, New Jersey introduced him to the job four years ago, long before many of the people now out there came. The new people, he said, took it too far with tourists.

"What happens when you have a new girlfriend, and then you treat her bad—what happens? She leaves you."

#corporate rule
#costume characters
#designated activity zone
#Desnudas
#first amendment
#free speech
#freedom of assembly
#neoliberalism
#ticket sellers
#Times Square
#original
Do you know the scoop? Comment below or Send us a Tip
A new Gothamist is coming! We’ve moved comments over to our beta site. Click here to join the conversation and get a preview of our new website.