Department of Transportation spokeswoman Alana Morales confirmed the adjustment. "As we've said we (and NYPD) would monitor the DAZ once they were installed and enforcement began to see if any adjustments needed to be made," she stated. "The DAZ are being extended 2 feet in width to allow for more space. We will continue to monitor."

During a City Council hearing on the zones this spring, DOT Commissioner Polly Trottenberg pitched zones roughly the size of a city bus, spread across a 112,000 square-foot area on the Times Square pedestrian plaza. She stressed that "we anticipate some trial and error."

We spoke to some Times Square costumed characters a few days into DAZ enforcement last week, and most of them expressed frustration with the zones, which they say are demeaning and increase their competition—compelling tourists, characters and ticket sellers to cram together into a narrow space.

"You ever see those animals at the Bronx Zoo? That's how I feel," said Louis M., an Elmo.

"We used to go out on corners," Rosa B., dressed as Minnie Mouse, said in Spanish. "The model was to go up to people and convince them to take a picture. Now we have to somehow try to get them to come to us."

Violations of the DAZ are punishable by fines that can go up to $500, and after repeat offenses, jail time. 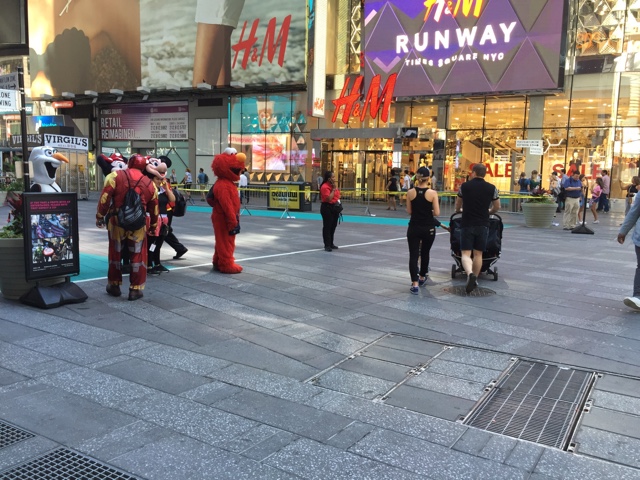 The Times Square Alliance, a business interest group that lobbied for the zones with a PR boost from the Naked Cowboy, said on Thursday that they have also replaced signs that read "tipping street performers is optional" with new signs bearing a slightly more transaction-friendly slogan: "If you take a photo with an entertainer, please note they expect a tip."

Several costumed characters worked the zones on Thursday morning, even as cops apprehended and hospitalized a naked man drawing attention to himself over the TKTS booth in Duffy Square. One family of tourists from Vancouver declined to tip, despite the new signage. After taking a picture inside the zone, the mother moved along while a character dressed as the Hulk pointed to a handheld card asking for tips.

Afterwards, the mother told us that she assumed the characters were part of a promotion, perhaps for Disney, and that she didn't think tipping was part of the equation. Minutes later, a few children ran into a zone while their parents stood back, delayed by a fake Buddhist monk. The second family declined to tip as well.

"The Times Square Alliance remains very pleased with the first few weeks of enforcement, and we appreciate this proactive response to feedback by the NYPD and Department of Transportation," said an Alliance spokesman on Thursday.

#Costumed Characters
#DAZ
#DAZ'd and confused
#dot
#Times Square
#original
Do you know the scoop? Comment below or Send us a Tip