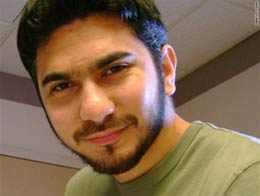 Faisal Shahzad, the Pakistani man suspected of driving a Nissan Pathfinder with a car bomb to Times Square, will be in federal court to face charges at 2 p.m. Shahzad, 30, reportedly became a naturalized US citizen in just last year in Hartford: He "was not known to the U.S. intelligence community before the failed bombing attempt in New York City, and there was no derogatory information about him in terrorism-related government databases, an official told the Associated Press on condition of anonymity amid the ongoing investigation. Shahzad passed all the criminal and national security background checks required for citizenship, the Associated Press reported."

According to the NY Times, Shahzad "has made statements implicating himself" and "told the authorities that he had acted alone." However, eight people have been arrested in Pakistan and one of those people allegedly met with Shahzad in Karachi. It's also believed that three other people helped purchase ingredients for the failed Times Square bomb.

Authorities apparently found a loaded handgun in the Isuzu Trooper that Shahzad drove to JFK Airport. Shahzad was apprehended last night while on a plane from NYC to Dubai and the plane had to be called back to the gate. The Times says, "All of the passengers were taken off, and they, their luggage and the Boeing 777 were screened before the flight was allowed to depart, about seven hours late, at 6:29 a.m. Two other men were also interviewed by authorities but were released, according to one law enforcement official. It was not known when Mr. Shahzad bought his ticket.

The FBI and NYPD descended on a Bridgeport, CT house where Shahzad and his family lived. He apparently defaulted on the $200,000 mortgage. Shahzad also lived in a Shelton, CT home, and one neighbor there told the Courant that they kept to themselves and that his wife wore traditional Middle Eastern clothing, "They were just really below the radar... They didn't have a lot of people coming and going, I cannot believe how well they blended in." Another neighbor told the Daily News, "He was a little bit strange," she said. "He didn't like to come out during the day," expanding the comment to a news station, "He was quiet. He would wear all black and jog at night. He said he didn't like the sunlight."

Mayor Bloomberg praised the authorities but added, "I want to make clear that we will not tolerate any bias or backlash against Pakistani or Muslim New Yorkers. All of us live in this City and among any group there’s always a few bad apples, but the people who live in this city are proud of the fact that this is the city that gives everybody from every place in the world an opportunity, no matter what religion they practice, no matter where they or their parents came from. It’s the City where you can practice your religion and say what you want to say and be in charge of your own destiny, and we’re going to keep it that way. People from every corner of the world come and live here in the same buildings and the same neighborhoods, and that’s what makes this the greatest city on Earth."

#arrest
#car bomb
#faisal shahzad
#Karachi
#Nissan Pathfinder
#Pakistan
#terror
#terrorism
#Times Square
#times square bomb
Do you know the scoop? Comment below or Send us a Tip
A new Gothamist is coming! We’ve moved comments over to our beta site. Click here to join the conversation and get a preview of our new website.