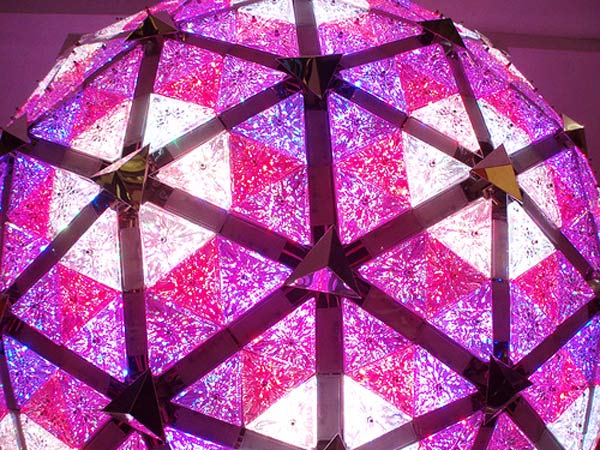 Remember when you were a kid and it was a big deal to stay up and watch the ball drop in Times Square on TV? Then you grew up and at some point realized that Times Square is the last place you’d want to spend your New Year’s Eve, right? But what if that jaded point of view is just keeping you from celebrating a one-of-a-kind experience in harmony with thousands of your brothers and sisters from around the world? Maybe this is your year to get over your fear of crowds, Dick Clark and Ryan Seacrest and be the reveler your younger self always dreamt you’d be! (Anyway, it’s a lot cheaper than most other options.)

And this seems like a particularly festive year to take the plunge; it’s the 100th anniversary of the New Year’s Eve Ball drop, and the event’s organizers have unveiled a new LED Crystal ball for the occasion. The surface consists of Waterford Crystal triangles and boasts “increased energy efficiency” – though twice as bright as the old ball, the new one will be lit with “approximately the same amount of electricity as it takes to power ten toasters or a single oven/range.” Since the ball drop started a century year ago, only two years were missed: ‘42 and ‘43, during the wartime "dimout" of lights in New York City.

If you decide to join the festivities, here are some things you should know:

Who’s in?! And we also have street closures and subway info after the jump.

If you want a good spot to see the ball – which is raised up at 6pm and lowered at 11:59pm – it’s recommended that you arrive in the afternoon and wait. The best view is along Broadway, from 43rd Street to 50th Street, and along Seventh Avenue, as far north as 59th Street. Dick Clark’s Primetime New Year’s Rockin Eve begins broadcasting at 10pm. There are helpful tips here, more history on the tradition here, and the strange journey of this year’s ‘8’ in 2008 here.

Have you ever greeted the New Year in Times Square? If so, any tips? And if you go this year, please let us know about it on the 1st (We’ve already got plans.)

From the NYPD and MTA:

People are strongly advised to use public transportation. On street parking will be extremely limited in the Midtown area. People should avoid all cross-town streets from 34th to 59th Streets, as well as Sixth and Eighth Avenues.

The Department will continue its drunk driving enforcement on New Year's Eve through DWI patrols and checkpoints throughout the City. The NYPD increased drunk driving arrests 16.4% over the last year, and as part of the DWI Forfeiture Initiative, seized 2,245 vehicles from drunk drivers so far in 2007, 33% more than 2006. Due to these efforts, our City experienced a 33% decline in drunk-driving fatalities this year.

The MTA also stresses not to bring alcohol onto its trains and buses.