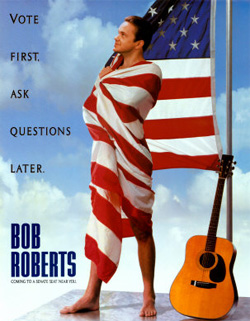 More on Tim Robbins Voter-gate! City Room has a thorough exposé on what went wrong for the Tapeheads star on Election Day, when he showed up to vote at the YMCA on West 14th Street and was told that his name was not in the Poll List Book. His misadventures got a lot of media attention after he refused to fill out a provisional ballot, accused poll workers of trying to "intimidate" him, and finally got a judge at the Board of Elections office to issue an order permitting him to vote.

Now Robbins is even more outraged because the Board of Elections has made public a letter [pdf] they sent to the Howard the Duck star blaming the whole mess on him. After digging through the records, they determined that in 2004 he registered under the name Timothy F. Robbins using the address of his office on West 19th Street. Because of that, he was supposed to vote at a different location.

Spokeswoman Valerie Vazquez-Rivera told the Times, "We were confused, but he shouldn’t have been confused. It was confusing for us to try to piece it together, but it’s all very logical: He filled out a new voter-registration form with an entirely new address, and went to the old address.”

Robbins says he's been voting at the Y since 1997 and does not recall re-registering with his office address. Also too, the Cradle Will Rock director is seriously pissed at the Board of Elections people for sending his public voter-registration records to reporters: "I resent that my address has been published and my family’s safety has been compromised by their attempt to explain their ineptitude...They’re saying it was my mistake, and I resent that...I’m glad this is getting attention, because I’m not the only one. There were lots of people at my polling place and throughout the city who came and saw their names off the rolls."