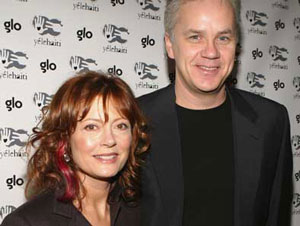 Susan Sarandon and husband Tim Robbins testified before the Landmarks Preservation Commission today in protest against St. Vincent’s proposal to raze the distinctive O’Toole Building in the West Village, as well as four other buildings to make room for a 299-foot-tall medical building and a 235-foot-tall luxury condominium (in partnership with the Rudin Management Company). For the former Bull Durham stars, all that would mean a lot of noise and dust soiling the air near their building, which is a block away.

But if the proposal’s detractors had celebrities, hospital president Henry J. Amoroso had 100 health care workers and hospital employees demonstrating across the street from the hearing, some of them holding signs reading, “We Deserve A World-Class Hospital.” Meanwhile, a crowd of 150 residents opposed to the plan gathered inside for the public hearing; there was much cheering and hissing, according to the Times. Speaking before the commission, Robbins held up one of the signs and said, “Yes, we deserve a world-class hospital. Unless it was a life and death situation, I wouldn’t go there.”

Oddly, his argument would seem bolster St. Vincent’s move today, which is to formally seek a “hardship exemption” to force approval of the $1.6-billion development plan. If St. Vincent’s can prove that its current building is physically or financially preventing it from carrying out its mission, the project will proceed. So comments from Sarandon like, “I would not want to bring my children there,” would only seem to underscore president Amoroso's argument that St. Vincent’s is falling behind and needs a new home.

Crain's has it that a number of elected officials came out to support St. Vincent's plan; among them City Council Speaker Christine Quinn, Manhattan Borough President Scott Stringer, New York state Sen. Tom Duane and Rep. Jerrold Nadler (D-Manhattan). No decision was made by the commission today, but the Times notes that of the seventeen hardship applications been received by the commission during the last four decades, all but five have won approval.

#condo
#demolition
#hospital
#landmarks
#plan
#proposal
#st vincent's
Do you know the scoop? Comment below or Send us a Tip