In the living room of a supporter in Jackson Heights, speaking in front of prospective voters who haven’t had a choice of District Attorney in 45 years, Queens DA candidate Tiffany Cabán faces an unexpectedly simple question: “What exactly does a prosecutor do?”

“People would stop me in the halls of the courthouse, and ask if I’m the prosecutor,” Cabán responds, apologizing for answering with an anecdote, as defense lawyers like herself are prone to doing. “And I would say, ‘No, I’m the good guy!’ And after saying that, it really hit me how messed up that is. Why is the prosecutor always the bad guy? Why do we have to have a system that works like that?”

Cabán, one of seven candidates currently petitioning to be included on the June 25th Democratic primary ballot, is part of an expanding movement across the country to capture an office that has a large impact on people’s day-to-day lives, even if it’s one that most voters rarely think about.

While Rep. Alexandria Ocasio-Cortez may dominate the national headlines, and your councilperson might secure funding for a park or school, it’s the district attorney who decides whether you’ll be turned over to ICE, whether your kids will be taken from you, whether your attorney will be able to see crucial evidence before you take a plea deal, or whether your probation violation for a missed appointment means spending a year in prison. They’ll also decide whether to use the power of the state to go after absentee landlords, people who scam the elderly, or sexual predators. While judges nominally have some part in those decisions, it’s the DA who can decide whether to pursue, drop, or minimize charges, meaning they hold the real power.

Since 1991, that power has been wielded in Queens by Richard Brown, who was handed the position when the county political machine selected him after the resignation of the incumbent, John Santucci, after 14 years in office. Brown has never faced a challenge for the office. While every other prosecutor's office in New York City has made some concessions to a criminal justice reform movement that has put the pre-trial detention “hellhole” of Rikers Island front and center in the national debate over mass incarceration, Brown has stood defiant. He has refused to start a Conviction Review Unit, which could investigate convictions and vacate them if they are found to have been obtained through false testimony or hidden evidence. He has also routinely asked for high bail for people charged with low-level offenses, and has come out against the closure of Rikers.

Brown’s staff is made up of only 30 percent people of color, despite the borough being 75 percent non-white, and several of the office’s main supervisors don’t live in the borough. Brown, who has had Parkinson’s disease through much of his last two terms in office, will step down in June, with Ryan filling the role until a newly elected DA takes over in January.

It’s easy to run on a reform platform when an office hasn’t reformed many of its policies in decades, and indeed all of the candidates—including borough president Melinda Katz and City Councilmember Rory Lancman—are running campaigns focused on reform and fairness. All of the candidates eagerly courted activist groups behind the campaign to close Rikers and radically overhaul the state’s criminal justice laws, promising to end cash bail, create a conviction review unit, and consider the immigration status of defendants before offering a plea deal. They all agree on reorienting the office to focus on things like housing protections, wage theft, and elder abuse. Even Gregory Lasak, who spent 14 years as a judge and 25 years as a prosecutor in Queens, earning the nickname “Mr. Murder” for prosecuting homicides, has said he’d bring much-needed “reform” to the office.

But the 31-year-old Cabán says promising to be for reform isn’t good enough, because she’s seen “reform” play out in Manhattan, where she’s represented indigent clients for seven years.

“I had a real fear, seeing who was running, that it was going to be another Cy Vance, another Eric Gonzalez,” Cabán says, referencing the prosecutors for New York and Kings counties. “We’ve seen incremental progress. We’ve had these small improvements. But we can be leaps and bounds ahead on day one.” 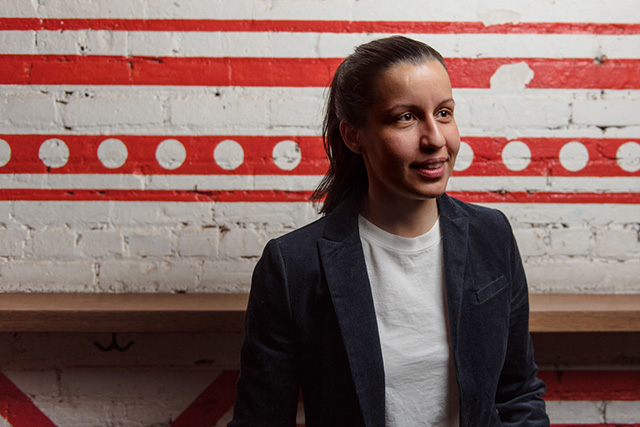 On the campaign trail, Cabán tells the story of one of her clients who was being prosecuted by Vance’s office for jumping a turnstile, something the Manhattan DA had won plaudits for announcing that he would no longer do. Except for a few exceptions, of course, like people out on parole.

“My client jumped that turnstile to get to his parole meeting,” Cabán explains. “If he didn’t make it to the meeting, it’s what we call a technical violation, and it would have landed him in jail for a minimum of six months.”

Now he faced another violation for the turnstile jump. Since being released from prison, her client had finished a drug rehab program, secured housing, and found a supportive partner, all of which was now at risk.

“The parole officer asked for an offer because if he was found guilty, they’d have to violate him and send him back to jail,” Cabán recalls. “But the prosecutor said, ‘No, he’s the exception.’ I turned to the prosecutor and asked him, ‘What is your goal here?’ If you put this man in jail, you take away his sobriety, you take away his home, you take away the relationship that roots him in his community, and then you throw him back on the street and you’re asking him to recidivize in ways that are way more serious than a $2.75 fare. It’s insane that these are the choices the district attorney’s office is making.”

Cabán is looking to join the ranks of former public defenders turned prosecutors like Philadelphia DA Larry Krasner and St. Louis County Prosecutor Wesley Bell. But Cabán would be the first to jump directly from protecting the indigent to being responsible for prosecuting them when they’re arrested. She’s spoken with Genevieve Jones-Wright, an active public defender last year when she unsuccessfully ran for the District Attorney’s office in San Diego, being subjected to boos and vitriol from lifelong prosecutors who packed debate rooms.

Cabán currently lives in Astoria, with her two dogs, whose hair features prominently on Cabán’s casual clothes. She was born in Richmond Hill, to parents who met in the Woodside Houses after both their families were approved for a housing transfer from other public housing in the Bronx. Cabán acknowledges her privilege as someone who was able to attend a private Catholic high school, then go on to law school and land her dream job at Legal Aid while still in her twenties. Even with those privileges, though, Cabán notes she’s still a queer woman of color who’s seen the myriad ways that law enforcement can derail lives.

“The first feeling I feel when I see a police officer is one of anxiety and stress, and I’m not someone who is particularly at risk,” she says. Growing up, she would spend a lot of time with her grandmother at the Woodside Houses. It was there that Cabán was exposed to “a community that was being overpoliced.”

Cabán has called for the redistribution of resources away from district attorneys’ offices, whose budgets continue to balloon year after year, despite the city continuing to lower its jail population. She says that money should be sent back into communities, supporting public health approaches to community safety like the “Cure Violence” model, which de-emphasizes policing in favor of community support and outreach. The model has been a success in reducing violence in places like Queensbridge. 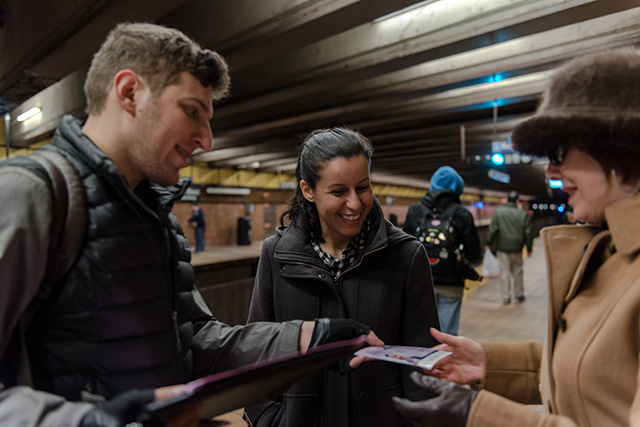 On a platform at the Queensbridge subway stop, Cabán, still battling through sickness from earlier in the week, talked to prospective voters about her campaign. One woman signed her petition, telling her “we need some young blood.” Then the woman made the obvious comparison between two young Latinx women seeking to take over positions held by older white men in minority-majority areas: “They said AOC would never win, but she did.”

If Cabán has a path to victory in the primary, it runs through much of the district where Ocasio-Cortez was able to win a shock victory in last year’s low-turnout June primary. Cabán has the support of the same local organizations that propelled AOC, and the Democratic Socialists of America, whose endorsement she nabbed last month, will send volunteers from across the city to help her cause.

Last week, Cabán won the endorsement of the Real Justice PAC, a political action organization fronted by activist Shaun King, which helped propel Bell to victory in St. Louis, and reformer Rachael Rollins in Boston; she followed that up on Tuesday with the endorsement of the Working Families Party. On Wednesday, State Senator Julia Salazar added her endorsement, saying Cabán "understands better than anyone the ways in which mass incarceration and the judicial system criminalizes the least powerful people in our society, especially communities of color."

If Cabán can connect with the activated immigrant communities and gentrifying neighborhoods of western Queens, as well as pick up votes in places with young transplants like Ridgewood, she could run a competitive race. After the victories of politicians like AOC and the just-as-radical, though less heralded state senator Jessica Ramos in Jackson Heights, as well as the successful grassroots campaign against Amazon, it’s hard to count out anyone who can unite this suddenly powerful coalition.

Still, AOC herself has announced she’s not going to endorse anyone in the campaign, depriving Cabán of a high-profile backer (for now, at least). Katz, the only candidate to have already won boroughwide office, has both name recognition and the support of the grievously wounded but not quite dead Queens County Democrats, as well as some labor unions. Law enforcement has lined up behind Lasak, while Lancman has spent a year trying sew up support in southeast Queens to complement his central Queens base. Handicapping a race like this is nearly impossible, and the campaign will most likely go without polling before the June 25th primary election.

One particularly effective part of Cabán’s campaign speech centers on her grandfather, who Cabán says was an abusive alcoholic when her mother was a young girl. When Cabán was growing up, her mother invited her father back into their lives, as the purple-heart Korean war veteran continued drinking himself to death while dealing with untreated PTSD.

“The man that I got to know, was so patient, so kind, so loving, so funny,” Cabán says. But she was aware of how vulnerable her grandfather was to cycling in and out of the criminal justice. “Where were the systems to support him? When we talk about the criminal justice system, we need to stop talking about good people and bad people, and start recognizing that all we have are people with trauma histories. Addressing those underlying issues is the best way to keep people safe, and that’s why I’m running. Not to just punish for punishment’s sake.”

#dsa
#elections
#queens da
#Tiffany Cabán
#working families party
#original
Do you know the scoop? Comment below or Send us a Tip