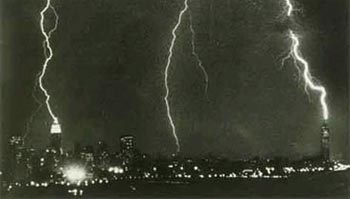 Lightning lit up the skies and thunder roared as storms rolled into the region. Winds gusted through, blowing construction debris into the streets and knocking scaffolding and trees down.

Right now, there are a number of scaffolding collapses; in Manhattan alone, some of the locations are 42nd Street & 12 Ave, 57 St & 11 Ave, 23 St & Madison Ave, Audobon Ave & 165 Street, while there's one at Benchley Place & Co-op City Boulevard. Construction debris has closed down part of East 23rd Street & Park Ave South, while people reported numerous downed trees all over the city, including one that may have fallen on a person in Manhattan.

And in NJ, some towns saw hail in addition to the rains and winds; NJ Transit service was temporarily suspended due to the weather.

The Severe Thunderstorm Watch ("strong thunderstorms capable of producing winds of 58 mph or higher and/or hail 3/4 inches in diameter or larger") is in effect until 1 a.m. tomorrow.