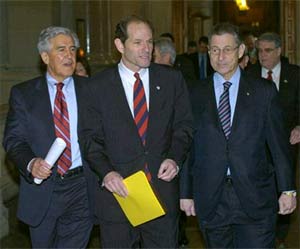 In spite of the presence of a new governor, Albany politics has been as insanely frustrating as usual. And the NY Sun's year-end interviews with the top three lawmakers - Governor Eliot Spitzer, State Senate Majority Leader Joseph Bruno, and Assembly Leader Sheldon Silver - demonstrate why pretty much everyone sighs when they think of the capitol and state politicians.

What would actually give us comfort is that these knuckleheads throw out at least 50% of the politics to actually get some work done. But if they won't do that, we'll settle for excellent soundbites like "Listen, I'm a f---ing steamroller, and I'll roll over you and anybody else!"