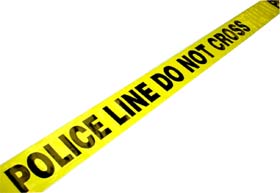 The Post spins the story this way: Andreyeva, who is married, had dinner with the Katses at their East 15th Street apartment on Sunday night. She and Elina Kats were having an affair and, at some point, her jealousy of Aleksey Kats led her to slash his throat early Monday morning. Elina Kats was sleeping in another room but awoke to see "Andreyeva leaving the apartment barefoot and covered in blood."

The Daily News says that Andreyeva stabbed Aleksey Kats - in front of his wife - with a kitchen knife. Apparently they had met for another rendez-vous on Sunday, but "They were not engaged in sex at the time of the killing." Elina Kats supposedly "reluctantly explained the affair" to detectives when Andreyeva was taken to the hospital.

The Katses' neighbors were stunned and said the couple, who have a 2-year-old daughter, was nice and worked hard. Andreyeva's landlady Rosemarie Idarola was also disbelieving that her tenant, a student at Fordham, could be capable of murder. Idarola told Newsday that when she asked Andreyeva and her husband to donate hair for Locks of Love, they were happy to do so: "She's a wonderful girl. I wouldn't rent to her if she wasn't."