A female inmate on Rikers Island was raped four times by one Correction Officer and repeatedly sexually abused by two others, according to a civil rights lawsuit filed late last year in Federal Court in Manhattan, the existence of which has not been previously reported.

Meanwhile, a criminal investigation into the case by the office of Bronx District Attorney Darcel Clark seems to be stalled. None of the men accused have been charged, even though surveillance video shows the officer who the woman says raped her taking her to a broom closet in the middle of the night, and an electronic recording device the woman employed for investigators captured the other officer admitting wrongdoing, says the woman’s lawyer, Paul Prestia.

“They’ve been investigating for many, many months now,” Prestia tells Gothamist. “They have the videotape. They seem to believe she was somehow to blame for what happened to her, though under the law she’s incapable of consent. They don’t seem to get that.”

The alleged abuse happened between September 2015 and December 2016. All of the Correction Officers accused of wrongdoing still have their jobs, according to a Correction Department spokesperson, who declined to comment further because the litigation is still pending.

The suit also names the City and Joseph Ponte, the former Correction Department Commissioner, as defendants. According to the suit, they are responsible for what happened to the woman because they failed to adequately supervise officers at Rikers, allowing a “prison culture” that is “functionally indifferent” to the sexual abuse of female detainees to flourish.

Initially the woman was named as Jane Doe in the legal complaint she filed, but after she was transferred off of Rikers and into the New York State prison system earlier this year, an amended complaint was filed on May 3 disclosing her name, Kelly Spinelli.

“The only reason she wasn’t named at first was because she was still on Rikers,” Prestia said. Once she was transferred to the state prison system, “she was brave enough to come forward and be named.” 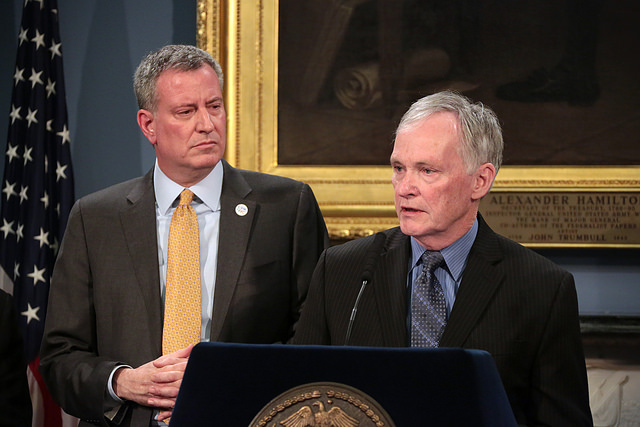 Spinelli was being detained on Rikers Island for allegedly participating in a botched robbery that turned to murder, according to the New York Daily News. Ultimately, she pleaded guilty to robbery, and was sentenced to six years in state prison, records say. She is due to be released in January, 2020.

Spinelli’s ordeal began at the Rose M. Singer Center on Rikers Island, in September 2015. While the jail was locked down, Officer Steven Santiago, who had a reputation for abusing female detainees, came by Spinelli’s cell and ordered her to pull her pants down and “touch herself” for him, her lawsuit says.

Then, according to the complaint, Santiago made her visit him in “the Bubble,” a guard post adjacent to the entryway to the housing unit ordinarily off-limits to detainees, containing the switches used to control the opening and closing of cell doors as well as the double-set of air-lock style doors that control access in-and-out of the unit.

During the time Santiago was doing this to her, a third officer, David Johnson, allegedly came to her cell and told her to “show him what she does for Santiago,” instead of offering her protection.

Three months later, Spinelli reported the abuse and agreed to cooperate with investigators and wear a wire for them. That wire captured Santiago telling her “not to say anything to anybody,” Prestia says, which he characterizes as an implicit acknowledgment of wrongdoing.

According to Prestia, prison officials did not take additional measures to protect Spinelli.

Five months later, in late September 2016, Officer Nana Osei came to Spinelli’s cell in the middle of the night and demanded that she follow him out of her cell, down a hallway and into a broom closet, where he raped her, according to her lawsuit.

Osei did this three more times, once more that night and twice more on another night, the lawsuit says, adding that Osei tried to buy Spinelli’s silence with marijuana, suboxone, and tobacco, stuffed in individual-serving size cereal boxes.

“There is video of him taking her to a broom closet for several minutes,” Prestia says he was told by a Bronx prosecutor, referring to one of the rapes allegedly committed by Osei.

“It’s a joke,” Prestia, who has previously represented Kalif Browder, said of the Bronx DA’s investigation. “I don’t know what the hold up is.”

Patrice O’Shaughnessy, a spokesperson for the Bronx DA, said the office does not comment on its investigations.

At a court hearing held in Spinelli’s civil rights lawsuit in January, federal judge J. Paul Oetken questioned an attorney representing the City as to whether Osei and Santiago still worked at the jail.

The city’s lawyer, Assistant Corporation Counsel W. KeAupuni Akina, confirmed that they did. Officer Osei, Akina said, had been reassigned to the transportation division and no longer supervised female inmates in their living areas, but he was not sure of Santiago’s current assignment.

Akina also said that he expected a settlement would be reached.

“This case will be resolved prior to trial,” he told Judge Oetken. However, a settlement conference in the case was held in April, and the parties failed to reach an agreement.

Last year, the City settled a lawsuit filed by two incarcerated women who claimed they were raped on Rikers Island by a Correction Officer for $1.2 million.

Neither Osei nor Santiago has been charged with any crime, and their lawyer, Ethan Felder, denies Spinelli’s allegations in court filings. Felder declined to comment for this story.

A spokesperson for the Mayor’s Office referred questions about the case to the Law Department.

The Law Department confirmed that they declined to represent the officers, and refused to comment further, citing pending litigation.

“While the media may try and convict these three Correction Officers in the press, the fact remains that they have not been proven guilty of any crimes and should be afforded the right to defend themselves in a court of law," said Elias Husamudeen, the president of the Correction Officers' Benevolent Association.

Commissioner Ponte was appointed in March of 2014 by Mayor Bill de Blasio, and was touted as a reformer. But Ponte’s tenure was troubled. Last spring, an independent investigation ordered by a federal monitor found that violence committed by Correction Officers against people held on Rikers Island continued at an "alarming rate."

Ponte resigned in May 2017 after the City’s Department of Investigation found that he had spent 90 days outside the city in 2016, even as violence on Rikers surged, and that he and his deputies frequently used city-issued vehicles for personal travel.

Mayor de Blasio continued to defend Ponte. “Commissioner Ponte was not dismissed, let’s be clear, and it wasn’t because of a mistake around some cars,” the mayor said after Ponte resigned. “It was time for him to retire. Let’s try to be accurate.”

The mayor then appointed the acting Commissioner, Cynthia Brann, to lead the Correction Department. Another independent report, issued in the fall of 2017, found that the "culture of violence" on Rikers remained.

Mayor de Blasio and City Council Speaker Corey Johnson have vowed to close Rikers Island over the next decade.

Read the full complaint below.

Disclosure: This reporter currently has a case pending in federal court before Judge J. Paul Oetken against the NYPD concerning how the department restricts newsgathering in New York City.

#abuse on Rikers Island
#correction department
#Joseph Ponte
#Rikers Island
#original
Do you know the scoop? Comment below or Send us a Tip