Three People Killed While The City Was Gripped By Snowstorm

Three people were killed, and another four were injured in separate incidents that occurred between Friday evening and Sunday morning. The incidents include a 15-year-old who was arrested for the non-fatal shooting of a 22-year-old in Harlem, and a 20-year-old man fatally shot at a baby shower in Morrisania. Unlike during the murder-free cold weather streak last month, this storm seems to have brought out a lot of violence.

It was a few minutes after midnight on Saturday when the 20-year-old was fatally shot at the baby shower inside of 501 E. 165th Street. That man's 22-year-old cousin was also shot, and is currently listed in critical condition at Lincoln Hospital. A super at the building told the Post that the surveillance video showed there were three attackers—one man standing watch at the front door, and two others who went into the room with the gun. Police add that there are no arrests and the investigation is ongoing.

Then around 12:30 a.m. on Saturday, the 15-year-old allegedly shot a 22-year-old two times in the leg near 1420 Amsterdam Avenue in Harlem. According to police, the 15-year-old physically resisted being arrested by Officer Efrain Santiago, to the point that other officers had to be called in to help. He was found in possession of a loaded and defaced Bryco Arms .380 caliber firearm (you can see a photo of the gun below). The 15-year-old, whose name has not been released, has been charged with assault, resisting arrest, and criminal possession of a loaded firearm. 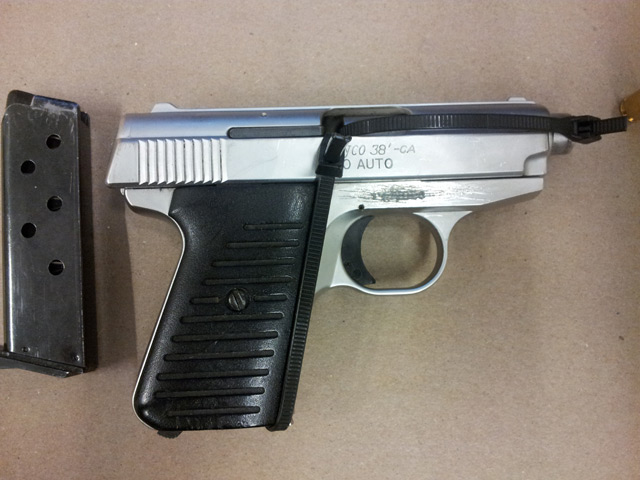 At 8:50 p.m., 19-year-old Bryan Antoine was found fatally shot twice in the back at the the One Star Deli on Clarkson Avenue in Brooklyn. Police say there have been no arrests, and the investigation is ongoing. “Nobody expects anything like that to happen in the storm — maybe in the summer, but not in a big storm,” said Bert Williams, owner of Bamboo Liquors (near where the shooting occurred), told the Post.

And finally, around 11:40 p.m. last night, 54-year-old Joseph Benzinger was found dead at the Crown Motor Inn on Queens Boulevard in Elmhurst. Police said the medical examiner determined the death was a homicide; sources told the News he had been strangled to death.