Police and prosecutors have announced the arrest of three more suspects in connection with the shootout that left Carey Gabay, former aide to Governor Andrew Cuomo, dead during predawn J'ouvert celebrations last September. Two suspected gang members have been indicted on murder charges, making a total of three facing murder charges, and a fourth man is being charged with possessing a MAC-10 submachine gun at the scene of the running shootout in which Gabay was caught in the crossfire.

Prosecutors are charging Tyshawn Crawford, 21, of East New York, and Ketih Luncheon, 24, of Crown Heights, with murder, weapon possession, and reckless endangerment. Each faces as many as 25 years in prison on the second-degree murder charges. A third man, Stanley Elianor, of Brownsville, was indicted back in October on gun possession charges, but officials only now made the arrest public.

"These defendants are charged with creating a killing field in a crowd of innocent people, showing depraved indifference to human life and causing the death of Carey Gabay, who used his Harvard education and commitment to public service to improve the lives of others," Brooklyn DA Ken Thompson said in a statement. "This indictment shows the importance of our efforts to put an end to gang-related gun violence that places innocent lives in the crossfire. " 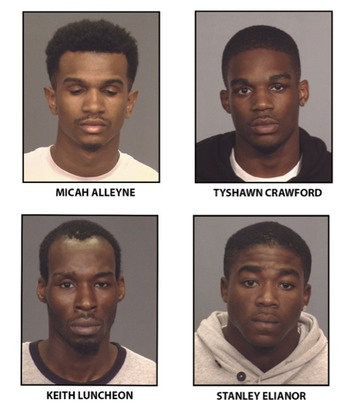 Last month, cops arrested Micah Alleyne, 23, saying that he was involved in a sprawling gun battle "with numerous others" on the patio and in a parking lot of the Ebbets Field Apartments, a rent-stabilized residential complex on Bedford Avenue in Crown Heights. The shootout took place at about 3:45 a.m. on September 7th, 2015, during the roving J'ouvert street parties that precede the daytime West Indian Day Parade.

A grand jury indicted Alleyne last week on murder, reckless endangerment, and weapon possession charges. He has pleaded not guilty and is being held without bail on Rikers Island.

Prosecutors say that the Ebbets Field patio is controlled by Folk Nation gang members, who have long feuded with the Eight-Trey Crips in nearby East Flatbush, and that gang members on both sides went out that Labor Day morning ready to shoot rivals on sight. The DA's Office estimates that two to three dozen shots were fired in all during the gun fight, from at least eight guns. District attorneys say Alleyne, an alleged Folk, has admitted to being on the patio and shooting a gun that morning, and that Crawford, an alleged member of the Brownsville crew Hoostarz, is on surveillance video pulling out a gun. A witness or witnesses saw Luncheon, an alleged Eight Trey, shooting, according to prosecutors.

The authorities also say they matched Elianor's DNA to a loaded MAC-10 found under a metal grate on the patio. Police arrested Elianor on September 18th, 2015, and he is being held without bail. He faces as many as 15 years in prison on the most severe felony gun possession charge. He is also facing dozens of possession of a forged instrument charges in connection with an April 2015 arrest.

Luncheon and Crawford are set to be arraigned this afternoon. Luncheon has outstanding cases for weapon possession and for manslaughter, criminally negligent homicide, and reckless driving. Crawford was arrested in March on charges of jumping bail, robbery, and weapon possession, prison records show. He has a pending gun possession case from July of 2015, got out that month on a $25,000 bond, and had a warrant put out for his arrest in that case in January, records show. A judge set his new bail in that case is at $100,000 yesterday.

At the time of his death, Gabay was 43 and a lawyer for Empire State Development, a state authority that doles out grant, loan, and bond money to developers and other businesspeople. He had previously worked as a legislative aide to Cuomo, helping, among other things, to draft the SAFE Act, which bans high-capacity magazines, mandates background checks for gun purchases, and heightens penalties for crimes committed with banned guns.

Prosecutors are pursuing murder charges under the theory that no matter whose bullet(s) killed Gabay, anyone involved in the shootout is responsible for murder by depraved indifference, because "they all entered into a de-facto agreement to engage in a gun battle."