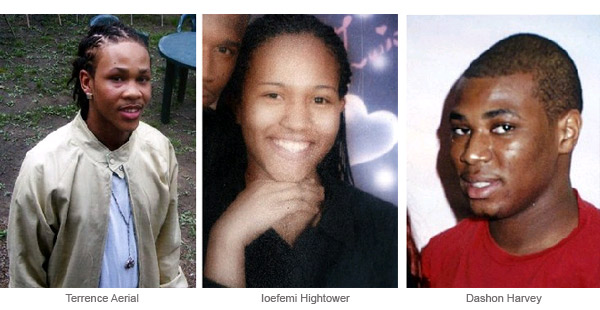 A brutal crime took the lives of three young people and injured one more in a Newark schoolyard on Saturday night, saddening and angering the community. Twenty-year-old Iofemi Hightower, 20-year-old Dashon Harvey, and 18-year-old Terrance Aerial were "lined them up against a wall and forced...to kneel" before being shot in the head, according to Newark police.

Aerial's sister Natasha was also with them, but she was shot first in another area. She survived a bullet passing through her face and police also found her with knife wounds to her head. She is now in fair condition at a hospital, and authorities believe her recovery will be essential to the investigation.

Police believe that the four friends, who were hanging out at the Mount Vernon School, were approached by a group of men who wanted to rob them. Newark Police Director Garry McCarthy says that the four realized they were in the danger, "There were text messages back and forth between the victims: 'Let's get out of here.'"
Terrance and Natasha Aerial, Hightower, and Harvey were all students or soon-to-be students at Delaware State University. Essex County Prosecutor Paula Dow emphasized that none had police records, "They were good kids." From the Star-Ledger:

Terrance Aeriel, 18, had been preaching in his church for three years and was working this summer with children at a Newark community center.

Iofemi Hightower, 20, had finally gotten her scholarship to Delaware State University and just started a job at an assisted living facility.

Dashon Harvey, 20, was named Mr. Junior at Delaware State and wanted to become a social worker after graduation.

Newark Mayor Cory Booker said (and see video), "These kids were success stories," but many in the community believe Booker has failed in making Newark safer. Donna Jackson of Take Back Our Streets said, "It's appalling that (Booker) will allow bodies to keep falling on the streets of Newark." Booker said, "It's obvious that I'm not to blame for this, but I'm taking personal responsibility. This is just not acceptable. This breaks the heart of our city."

The police are offering a $20,000 reward, but the NY Times notes that "Witness intimidation and fear of retaliation has stymied law enforcement efforts to combat violence in communities across Essex County, and particularly in Newark, where drug trading and gangs fuel most of the crimes." In May, the Times examined the issue of uncooperative witnesses to violent crimes; take a look at these graphs that chart crimes and arrests over time (homicides are trending up).