At least 10,000 people, many of them Chinese Americans, crammed into Cadman Plaza in Downtown Brooklyn yesterday afternoon to protest the treatment of former NYPD officer Peter Liang, who was found guilty of second-degree manslaughter two weeks ago.

Protesters piled into vans and subways beginning Saturday morning in Chinatowns across the city. Yonghon Tan, a Chinese American in her thirties, took the R train from Elmhurst after the van she’d lined up for was too full to accommodate any more passengers.

“When I heard the result, I started reading the newspaper and looking up what actually happened,” Tan told Gothamist while on the subway platform. “I think it’s unfair to put a rookie in the most unsafe place in the city. Then, after the shooting, the NYPD abandoned him. The NYPD should be held accountable just as much as he is for what happened.”

Liang shot and killed 28-year-old Akai Gurley in the dark stairwell of East New York’s Pink Houses in November of 2014.

Many in the crowd lashed out against a criminal justice system they perceive as biased against minorities. While Liang, a rookie sent to a housing project deemed “one of the most dangerous in the city,” was found guilty and is facing serious jail time, NYPD officers like Daniel Pantaleo, who choked Eric Garner to death on a Staten Island sidewalk in 2014, never get indicted.

“We understand the pain among our African-American brothers and sisters, who have witnessed the killing of one unarmed black man after another in continuous succession, with no prosecutions against the officers," former City Comptroller John Liu, told the raucous crowd. “That is a great injustice.”

Liu continued: “So in an incident where an Asian-American officer shoots his gun, not aiming at anybody, shoots it by accident, we were all shocked last Thursday, when the guilty verdict came out. But were we really shocked?"

“For 150 years, there’s been a common phrase in America: ‘Not a Chinaman’s chance,’ which means if you’re Chinese in America, there’s no hope for you.”

Community Affairs officers at the rally put the number of protesters at "over 10,000," citing how they typically calculate the number based on square footage, but that this did not factor in the throngs of Liang supporters spilling out of the park onto the sidewalk and nearby streets.

Dr. David Li, 50, a licensed acupuncturist, came by van from Bay Ridge, Brooklyn arranged by the Taishan Association of America and stood with fellow volunteers who manned a small first aid station deep in the middle of the crowd.

"Everybody thought that this was just a procedure that he had to go through," Dr. Li said by way of explanation for the lesser turnouts at events following the indictment. "And now they are putting him in jail and we see it's not a procedure."

Referring to Liang’s sentencing in April, Dr. Li added, "Hopefully the judge will see this, what, more than 50,000 people?"

In Flushing, Queens, Dr. Yan Sun, a professor of political science at Queens College, took notice of the swelling crowds unable to get seats on the 20 commuter vans shuttling supporters to the rally. She went to a nearby 99-cent store to draw up signs to better direct streams of supporters to the subways. She joined the rally "after the free vans ran out."

"We were all stunned by the guilty verdict," Dr. Sun said. "We thought it was a political show and that there would not be enough to convict him—even up to the last day of the trial—so we didn't take it seriously enough earlier, we didn't get involved."

A man holding up one side of a long red banner for the Brooklyn Chinese Volleyball Association, said the 30 people representing the group at the rally would be playing volleyball later at Leif Erickson Park in Sunset Park, Brooklyn.

“We're just regular people,” he said, “but we all need to show support. Peter is a victim, too." 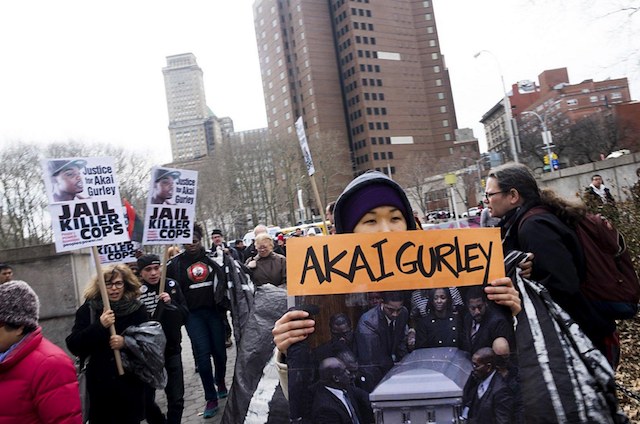 Away from the speakers at the northern end of the park, supporters of the verdict, including Hortencia Peterson, the aunt of Akai Gurley, stood in front of a large “Black Lives Matter” banner, and faced near-relentless aggression and derogatory language from those who had come to protest Liang’s treatment.

After earlier scuffles, where Liang supporters had apparently ripped up a sign belonging to them, the supporters of the verdict were moved to a median in the middle of the street by the NYPD. There they were surrounded on all sides by the protesters.

“Peter Liang shouldn’t have been allowed to kill anybody, it’s wrong,” Najieb Isaac, a supporter of the verdict and member of the group Why Accountability, which focuses on the prosecution of police misconduct, shouted across the street to the opposing protesters. “And if you’re standing for that, you’re standing for the wrong thing. You should be standing against police brutality and murder.”

Members of CAAAV, an advocacy group in New York allied against police violence that works with Asian immigrants, who have stood with the Gurley family since the immediate aftermath of the shooting, raised their arms and chanted “which side are you on?” in solidarity with Gurley’s aunt. The group has had several threats made against them since the verdict.

Wally Wong, 30, who works as a day trader, wore a badge that identified him as “security staff.” He wore a headset and portable loudspeaker on his belt—to save his voice, he said. He added that he was there to protest the verdict, but later in the rally, he worked to rein in some of the angrier protesters. He continued his patrol until the park was emptied.

"We are sad and sorry for what happened,” Wong said. “But we are trying to send out a message: we are silent, but we are not always silent."