Bobby Tolbert currently lives in transitional housing in Mott Haven because he can't afford to find a permanent home. He's been HIV positive for over 20 years, and is on disability. "I've been navigating the shelter system for ten years now," he says. "It's very difficult to sustain a stable living situation."

Tolbert and thousands of New Yorkers across the city converged on Foley Square last night to march across the Brooklyn Bridge in support of stronger rent regulation laws and more affordable housing.

Wanda Hernandez Park, the chair of Vocal New York, lived in the Bronx until three months ago, when the landlord raised her rent. Since then, she's been staying with friends in Harlem while she hunts for a new place to live. "I've been getting a lot of income discrimination," she says. "I am on disability, and I have a stipend. Unfortunately, I've been to maybe 95 realtors with no luck. I don't have much of an option."

New York City currently has 1 million rent regulated apartments, housing 2.5 million low-income New Yorkers. However, loopholes have led 35,000 apartments to lose their stabilization status since 2011. As more and more New Yorkers are priced out of their apartments, the pool of affordable units continues to shrink rapidly; homelessness has reached a record high. 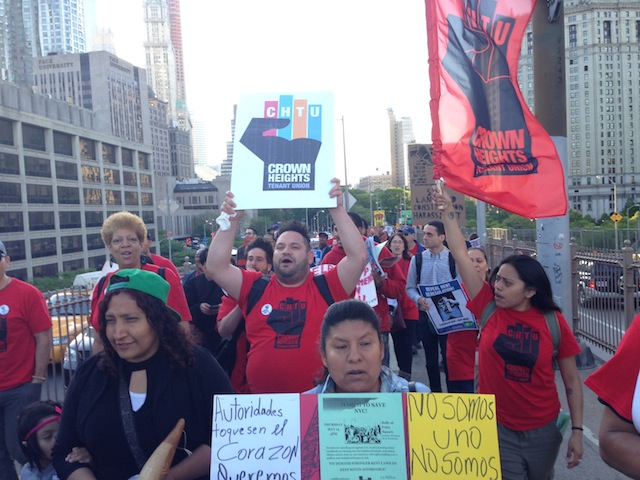 The timing of yesterday's march was strategic: New York's current rent regulation laws are up for renewal on June 15th, along with 421-a, a '70s-era tax abatement program which gives developers temporary freezes on their real estate taxes, in exchange for building new apartments.

The rent regulation law's fast-approaching renewal date, combined with the recent indictments of former Senate majority leader Dean Skelos and former Assembly Leader Sheldon Silver (both of whom have been accused of dealing under the table with real estate bigwigs) has brought the cry for stronger tenant protections to a fever pitch.

Last week, de Blasio rolled out a new affordable housing policy. In addition to pledging to reform the 421-a subsidy to provide more affordable housing, the mayor wants to abolish vacancy allowance, which allows landlords to increase the rent in rent-controlled apartments by a whopping 20% between tenants—a loophole that encourages landlords to offer buyouts to those with rent-controlled apartments. 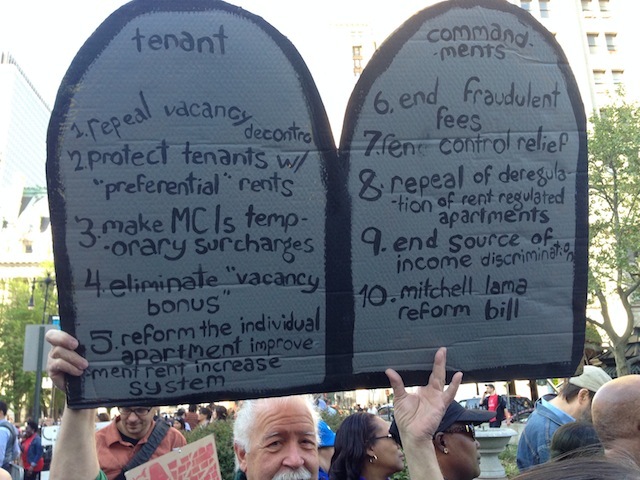 Donna Mossman of the Crown Heights Tenants Union has lived in a stabilized unit in 1159 President Street in Crown Heights for 38 years. Two years ago, new owners offered her and her neighbors buyouts as high as $125,000. Mossman's building was sold again in April, along with 1153 President Street, for $13.1 million. Last night she described what she fears is coming next, based off of prior experience. "We understand that the only way these developers are going to earn any money back from these purchases, is to empty the buildings. And the first thing they start with is buyouts," she said. She continued:

Theodore Brooke, who lives with his wife and two kids in a rent-regulated apartment on 15th Street in Park Slope, describes himself as middle class. Since new owners took over his building earlier this year, "It's been buyouts, intimidation, and harassment," he said. 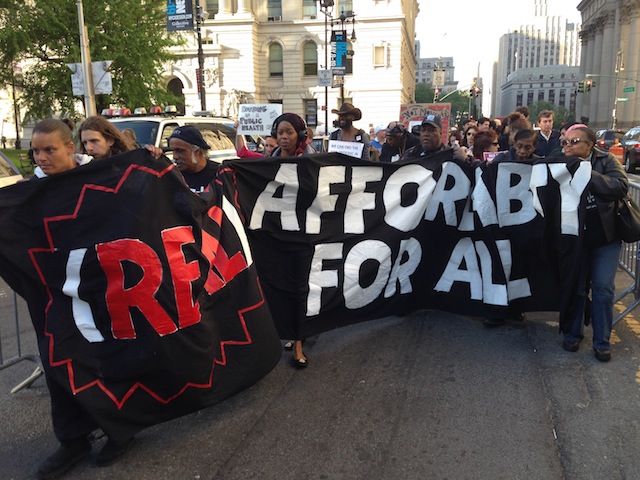 Andrew Austin has lived in Brownsville for the last year and a half, in a transitional apartment building for former alcoholics and drug addicts. He is on public assistance, and receives about $400 a month from the government. "In my neighborhood, even in the blocks that surround where I live, the lowest rent is around $1,700 a month," Austin said. "How can I afford the rent?"

Other marchers spoke about gentrification creeping into their neighborhoods. Nadya Peoples lives in Flatbush. "I'm watching it happen on the trains," she says, of the changing makeup of her neighborhood. "So far it stops around Church Street on the 2, but little by little you can see it around Beverly and Newkirk. We want diversity, but I know the second I see an organic food store… I can't. The situation is very racist, and it's very classist."

As the march wound down a narrow police barricade and across the Brooklyn Bridge, the chanting protesters outnumbered a steady trickle of confused-looking tourists walking towards Manhattan. Jean Hunte, who lives in Crown Heights, glanced over at a group on Citi Bikes. "You wanted to come see New York?" she said. "This is what New York looks like!"

#affordable housing
#Albany
#rent regulation
#rent stabilization
#original
Do you know the scoop? Comment below or Send us a Tip