“I’m in a cell by myself the size of an elevator. I felt like the walls were closing in on me,” he told Gothamist. Every day was the same, he recalled. The only way he knew it was Christmas was by looking at the calendar he had drawn for himself. Even then, Christmas meant not only being separated from his family, but being unable to even call them.

Being in isolation took its toll even on non-holidays. “Every night, there’s yelling and screaming,” Clark recalled. “You can’t sleep.” Clark was allowed out of solitary in 2002 and came home from prison in 2012.

Even out of prison, the experience still haunts him. “I was in a cramped cell for years with nothing. I became antisocial... Even childhood friends, they see that my behavior has changed. They see that I’m not the same person I was. I feel like I’m damaged goods.”

Clark, now a member of Brooklyn-based advocacy organization VOCAL-NY, joined over two dozen advocates on Thursday to rally outside Governor Andrew Cuomo’s Midtown office and sing modified Christmas carols calling for an end to solitary confinement in the state.

They brought a poster-sized Christmas card inviting Cuomo to spend 24 hours in a solitary confinement cell and urging him to pass the HALT Solitary Confinement Act, which would limit stints in solitary to 15 consecutive days and create alternatives for people who need to be separated for longer periods.

New York’s 54 prisons currently hold over 2,500 adults in their Special Housing Units (SHU), dedicated cellblocks whose inhabitants are locked in their cells for 23 to 24 hours each day. Advocates estimate that at least another thousand are held in keeplock, a different form of isolation in which a person is locked in their cell (as opposed to a designated isolation unit) for 23 hours each day. And, says Jack Beck, director of the Prison Visiting Project at the Correctional Association of New York, one thousand may be an undercount. In the three prisons he visited this year, there were 240 people in keeplock.

Given that January marks a new legislative session, the HALT Solitary Confinement Act, which passed the State Assembly in June, will need to be re-introduced. Advocates are hopeful that it will pass in both the Assembly and the Senate.

But Cuomo need not wait for the state legislature, notes Beck. “He could end solitary confinement through the Department of Corrections and Community Supervision.” Beck says to do so, the governor and his appointed prison director, Anthony J. Annucci, “have to be committed to a therapeutic environment that treats people’s problems. That is not going to happen by locking them up and just letting them out to play games. And that’s going to require some resources. It will save money in the long run because we’ll have fewer people in solitary and they’ll get out [of prison] sooner. Cuomo could do that literally starting tomorrow. He could put it in the budget.”

A representative from the governor’s office did not respond to a request for comment. 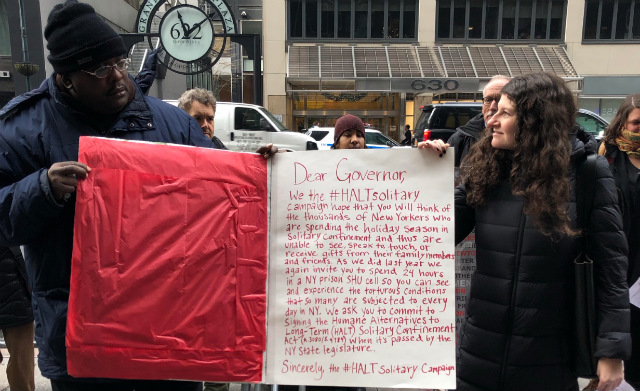 Roger Clark (left), who served five years at Southport Correctional Facility, some of it in solitary confinement, holds a letter to Governor Cuomo outside the governor's Midtown office on Thursday (Victoria Law / Gothamist)

Beck, Clark and other advocates point to Colorado, where prison director Rick Raemisch drastically changed the system’s solitary practice, limiting isolation to 15 days and assigning them therapists and other behavioral interventions. The number of people in isolation dropped drastically—from 1,500 (nearly 7 percent of Colorado’s prison population) in 2011 to 18 in October 2017.

Victor Pate is the statewide organizer for New York's Campaign for Alternatives to Isolated Confinement. But in 1975, Pate was a 23-year-old new to the infamous Attica prison. Shortly after his arrival, Pate was sent to solitary for two weeks for having too many bedsheets in his cell. Prison rules dictate that people in solitary be allowed one hour out of their cell, but it was winter and the recreation cage was filled with snow. “I had a choice of going out in the snow up to my knees or staying in my cell,” he recalled. Most days he opted for his cell.

“It felt like the end of the world. It felt like it’s never going to get better. It felt like this might be the end of me.” After his time in isolation, he found himself feeling anti-social and unable to engage in conversation. “The trauma of being isolated weighs heavily on a person’s psyche,” he said. “Had they had therapy, an opportunity to engage in conversation with another human being, it would have been a much better transition and [would have] helped me cope with the fact that I was incarcerated.”

In early December, Pate visited Colorado’s alternatives to solitary. In these units, he describes, people are allowed out of their cell for four hours and have the ability to interact with other people as well as meet with social workers and psychologists.

Pate recalls entering the cell of one man in the unit. “I went into his cell and sat on his bed,” he said, noting that no guard or prison staff member hovered over the two men to listen to their conversation. “I asked him, ‘Is this smoke and mirrors?’ He told me, ‘If they had had this years ago, I wouldn’t have come back to prison. As a result of coming into this unit, I think different and I act different.’

“We need to rehabilitate these guys. We don’t need to torture them. You’re doing more harm than good,” Clark added.

As Clark and another CAIC member headed into the building to deliver the card to Cuomo’s staffer, advocates sang their version of My Favorite Things: “When the door slams/When the key turns/When I’m going mad/I simply remember my family and friends/And then I just feel so sad.”

#andrew cuomo
#prison reform
#prisons
#solitary confinement
Do you know the scoop? Comment below or Send us a Tip