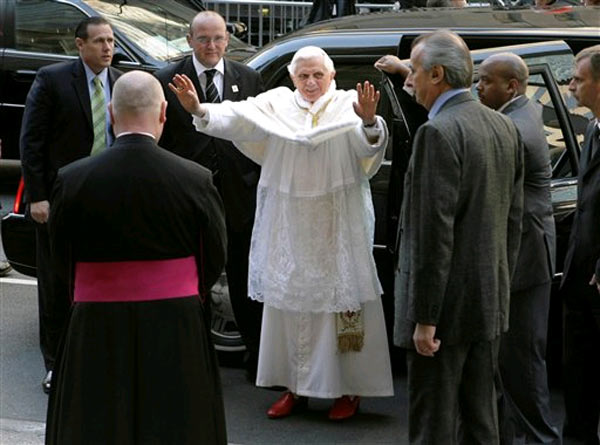 Pope Benedict is giving the first ever papal mass at St. Patrick's Cathedral, after being greeted by cardinals, bishops, priests, nuns and others who flocked to Fifth Avenue to see the Holy Father. You can see the mass on local news stations or online (at the websites of WNBC, 7online, WCBS, MyFox). Mayor Bloomberg greeted the Pope and told the audience at St. Pat's, "This a historic day for New York."

Pope Benedict made note that today is his third anniversary as Pope and referred to Catholicism in the U.S., "In this country, the church’s mission has always involved drawing people ‘from every nation under heaven.'" CityRoom is liveblogging the mass. Religion writer David Gibson, who is blogging about the Pope's visit for Beliefnet, says the mass is a "heartfelt and often lyrical call for American priests to overcome divisions so that the church can grow once again."

After the mass, the Pope will be traveling up Fifth Avenue in his Popemobile. Fifth Avenue between 53rd and 70th Streets is open for people to view him. Traffic has actually been pretty good; one cab driver said yesterday was so clear "you could fly."

Yesterday, the Pope defended human rights during his speech to the United Nations, "The promotion of human rights remains the most effective strategy for eliminating inequalities between countries and social groups, and for increasing security." He also said religion could help expand understanding of human rights, "A vision of life firmly anchored in the religious dimension can help to achieve this since recognition of the transcendent value of every man and woman favors conversion of heart, which then leads to a commitment to resist violence, terrorism and war and to promote justice and peace." 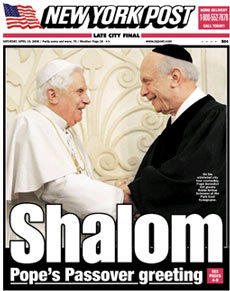 The Pope also made a historic visit to the Park East Synagogue on the Upper East Side, telling the delegation, "I encourage all of you to continue building bridges of friendship with all the many different ethnic and religious groups present in your neighborhood."

He also said, "It is with joy that I come here just a few hours before the celebration of your Pesach [Passover] to express my respects in a scene for the Jewish community in New York City." The Pope was given a seder plate, a Haggadah, and some matzoh, which the Holy Father said he'd eat tonight. Rabbi Arthur Schneier, who received a 15th century Hebrew manuscript from the Vatican, told him, "In the last 45 years much progress has been made. Your presence here gives us hope and courage for the road we still have to travel together."

Yesterday was also the first day the Pope did not address the Catholic Church sex abuse scandal. However, according to the NY Times, a Vatican official suggested--seemingly spontaneously-- there could be changes to extend the church's statute of limitations on handling abuse cases, because some victims do not come forward until years later.