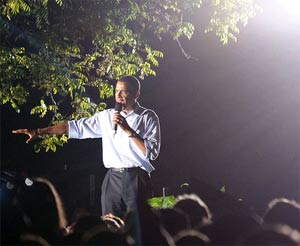 A huge crowd fathering in Washington Square Park last night to hear Senator Barack Obama speak. He mentioned that he "used to hang out in Washington Square Park" and that he knew "a little something about Greenwich Village." His speech touched upon issues like making college more affordable and how his relative lack of experience didn't matter, "Longevity does not guarantee good judgment. A long resume says nothing about your character.”

And there was love: When one supporter yelled love for Obama, the senator from Illinois said, "I love you back." An NYU freshman told the Washington Square News, "Barack Obama is the most gangster politician to ever come to Washington" and that "Hell yeah!" he would vote for him, while a 72-year-old registered Republican told the Columbia Spectator that she would be voting Democrat no matter what, "We’re in a very, very serious time now with our safety and our freedoms." 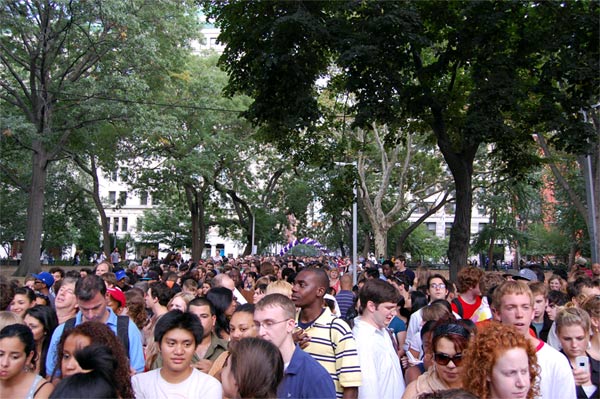 Senator Hillary Clinton, the Democratic front-runner, is expected to win the NY State Democratic primary, but the Times also explains that Obama could pick up part some NY State delegates since Democrats "split their delegates proportionally." An adviser said, "We heart New York. Delegates are proportioned by congressional district – not winner take all. We firmly believe we can come out of New York with a sizeable delegate piece for Barack.” And NYC is where a lot of money is. The third quarter of campaign financing ends on Sunday.