Thousands of New Yorkers crammed as close as they could to Trump Tower on Monday night to shout down President Donald Trump on his first trip to his Midtown home since January. The protests, which were planned last week, gained a special urgency following a neo-Nazi and White Supremacist rally in Charlottesville, Virginia that ended with the death of one anti-racist protester mowed down by driver behind the wheel of a Dodge Challenger.

Carlos Rivera, 20, a Parsons student, said he was troubled to see images of "Unite the Right" participants marching through the University of Virginia campus with tiki torches.

"I myself am a college student," he said. "It's crazy to think that in a place where you are going to acquire knowledge, you would have those mindsets."

Dozens of protesters initially refused to leave the corner of 56th Street and 5th Avenue across from Trump Tower, staging a brief sit-in on the sidewalk while two rows of police officers lined up in the street facing them. The group chanted, "We have every right to be here," while the NYPD used a microphone to threaten arrests. Police climbed over the barriers after several minutes and slowly parted the group down the middle. Many protesters inched back, facing the police with raised fists and shouting, "This is what fascism looks like!" 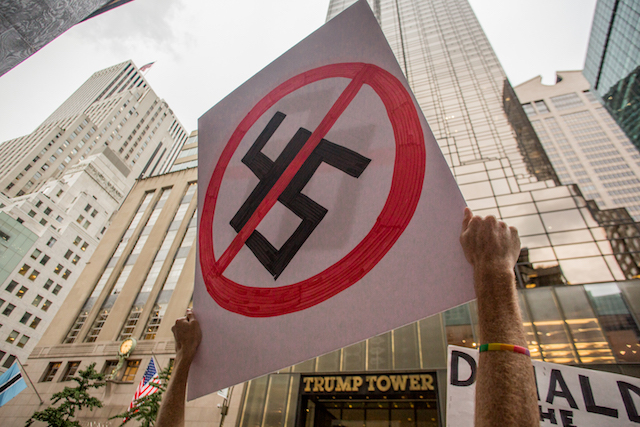 A protester outside of Trump Tower on Monday evening. (Scott Heins / Gothamist)

"I think its awful that we have to leave this sidewalk. Why can't we be right here? They've got people taking pictures of us," said protester Emma Schull, 27, motioning to the police.

"They just threw this girl on the floor," said Gia Greer, running away from the crowd. "The police officer took her entire body and just threw her on the floor."

"I saw police officers talking amongst themselves and come and surrounded one guy and drag him away... they just swooped the guy off," her mother Marilyn added.

Three people were arrested at Monday's rally, according to the NYPD. Charges included obstructing governmental administration, refusing to disperse and reckless endangerment.

"The ones... the national guard and the police in their riot gear are protecting are Donald Trump, Mike Pence and their fascist cabal in the White House," said Desba Rojas, 23, of Brooklyn, a member of Refuse Fascism.

Funneled north of 57th Street and south of 56th, demonstrators chanted and sang, waiting for Trump's arrival. Hundreds laid out their disgust in a mic-check call and response.

"We are here because Donald Trump is a fascist who has released White Supremacists to march through the streets and murder our people," the group said. "We stand for millions. It is 2017. The goddamn Klan and Nazis are murdering in the streets and Donald Trump did not say shit about it for days."

After 32-year-old Charlottesville resident Heather Heyer was killed by rogue driver James Alex Fields Jr. on Saturday, Trump criticized violence "on many sides" without explicitly denouncing the hate groups that participated in the weekend action. He waited until Monday afternoon to say that "racism is evil."

"I've taken a few breaks [from protesting] this summer just to preserve myself and for my mental health. But now I'm back," said Chyenne Akia, an 18-year-old college student from Albany standing on Fifth Avenue. "I'm ready to keep the momentum going. People need to understand that our president had the opportunity to fully denounce hatred for what it is, and to denounce the very thing that he's protecting."

The contingent of counter-protesters was thin Monday. Roughly ten people clustered on 5th Avenue and 58th Street, near a larger contingent of anti-Trump demonstraters. Their chants of "USA! USA!" were matched with shouts of "We love Gays! We love Gays!"

Trump's motorcade arrived shortly after 9:00 p.m., passing through protesters shouting, "No Trump! No KKK! No racist USA!" and "New York hates you! The whole world hates you!"

Earlier in the evening, demonstrator Natasha Beshenkovsky, 73, walked through the crowd holding a sign with three hooded KKK figures, one painted orange and blue in Trump's likeness.

"I was a political refugee from the Soviet Union 40 years ago. I came here because I am against the exact type of government they're trying to impose here," she said.

"The secrecy, screaming about leaks, they admire strong arms. Our so-called president doesn't know how government works. He wouldn't pass a naturalization exam. I'm trying to enjoy the democracy while it lasts—nobody can say how long that will be."

Trump is expected to be in New York City through Wednesday, according to the NYPD. Another action, for immigrant rights, is planned for outside Trump tower Tuesday evening.

#Fascist
#Trump Tower
#Trump Tower protest
#original
Do you know the scoop? Comment below or Send us a Tip