Thompson's Divorce Lawyer: "My Client's Not Too Smart" 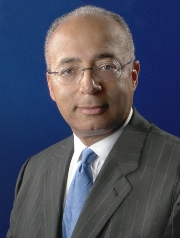 City Comptroller William Thompson is embroiled in a bitter divorce with his second wife that has gotten so strange that his own lawyer has taken to insulting him! The Daily News reports that lawyer Saul Edelstein--who had called Thompson's ex-wife "crazy as a loon"--said privately but in "full voice," "By the way, my client's not too smart, either."

While Thompson and Sylvia Kinard-Thompson's divorce was finalized in 2006, Edelstein is unhappy that the former couple is fighting over a credenza that belonged to Thompson's grandmother. A Daily News reporter happened to be at the hearing, right behind Edelstein and a colleague, who said Thompson probably wouldn't want these legal proceedings detailed "in the Daily News." Doh!

While Thompson wasn't at the hearing, Kinard-Thompson was and told the News, "I am shocked and disappointed by those comments. I have always regarded this as a private matter....As a Christian, I will continue to pray for Bill. As an attorney, I will see his lawyer in court."

#credenza
#divorce
#william thompson
Do you know the scoop? Comment below or Send us a Tip