Thomas Says It's Really All the Fans Fault 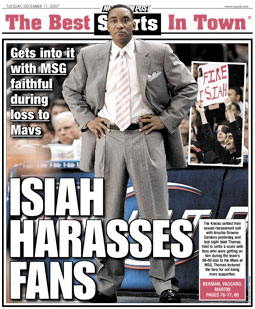 It’s your fault. You may have thought that forking over a huge amount of money for a ticket gave you the right to boo the Knicks, but the coach disagrees. In a season that takes one bizarre turn after another, the latest tops them all, Isiah told the fans that the Knicks are losing because they boo. "We're missing layups because you're booing,” Isiah told some fans during last night’s loss. Right! Perhaps fans are booing because your team is missing layups, Isiah.

Maybe this is all a ploy by Thomas to get fired so he can go home and collect his money from Jim Dolan. Then again, maybe he has just completely lost touch with reality. Before the game, the Knicks announced that they had settled Anucha Browne Sanders’ sexual harassment suit "at the strong request of" David Stern. The Knicks and Browne Sanders settled the lawsuit for $11.5 million while the jury awarded her $11.6 million in punitive damages. The amount of compensatory damages was to be decided as the case resumed this week. By settling, the Knicks avoid paying Browne Sanders' legal fees and any additional damages while Browne Sanders gets the money faster an won't face the possibility of an appeal.

Despite settling, MSG and Thomas still seem to think they did nothing wrong. “I am completely innocent,” Thomas said, which is an interesting conclusion to draw when a jury finds you guilty and you agree to pay out millions of dollars.

But, personal responsibility is a foreign concept to the Garden. Otherwise Isiah might realize that he put together this team, the highest-paid in the NBA, and he coaches it. This is his team and the court of public opinion finds him guilty of running it into the ground.

#anucha Browne sanders
#anuchabrownesanders
#basketball
#Browne Sanders
#court
#david
#david stern
#isiahthomas
#jim dolan
#jimdolan
#knicks
#lawsuit
#money
#msg
#nba
#news
#running
#sports
#the game
#the knicks
#this week
Do you know the scoop? Comment below or Send us a Tip
A new Gothamist is coming! We’ve moved comments over to our beta site. Click here to join the conversation and get a preview of our new website.