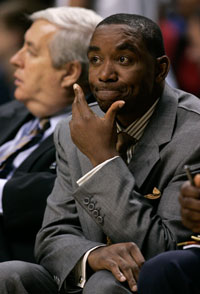 His team tied the franchise record for most losses in a season. He assembled a mass of costly players that were long on extra pounds and short on ability to win games. He was found liable on six counts of sexual harassment. The day after Isiah Thomas' Knicks played the final game of the 2007-08 season -- a loss of course -- the coach and the rest of the world are still waiting to learn officially of his fate. The Daily News, however, says he's gone.

What does team president Donnie Walsh have to think about? Even if he did take the job -- and out Thomas from that position -- just a few weeks ago, had he not seen enough to want him to head in another direction? The end of the season didn't bring the Knicks a chance to redeem themselves; they've been out of the playoff hunt for months and have been playing other teams' second-string players.

As is the case with many parting of ways in sports, this one may be coming down to money. Thomas got a reported $24 million contract extension last season. Oops! If the Knicks fire him, they will end up eating a good portion of that money. Unless, that is, they nail him for talking to reporters, like they did Larry Brown.

No matter how much the Knicks want him to "earn" that money in another role, however, the Daily News points out they don't want him to be in a position that has day-to-day contact with the front office or the players. With one report out, the Knicks may be pressured to act quickly. Then again, they are the unpredictable Knicks.