On Tuesday morning, Bushwick native Will Giron posted a picture on his Facebook wall of Brooklyn artist London Kaye installing a 15-foot crochet mural on the side of his family's building. Entitled "Moonshine Kingdom," it depicts Sam Shakusky from Wes Anderson's 2012 Moonrise Kingdom holding hands with Delbert Grady's daughters from The Shining.

Giron, a tenant advocate and legal coordinator for the Fifth Avenue Committee, grew up at 56 Wyckoff Avenue, which abuts the Bushwick Flea—a weekend flea market in "the heart of trendy Bushwick" that has been open seasonally, on weekends, since April. He has since moved to Queens, but visits the apartment once a week, where his aunt, the owner, still lives. Rob Abner, the flea's founder, gave Kaye permission to erect the crochet piece, which she spent over $100 and more than 100 hours executing, in August. Abner did not, however, ask Giron's aunt if he could decorate the facade.

"Gentrification has gotten to the point where every time I see a group of young white millennials in the hood my heart starts racing and a sense of anxiety starts falling over me," Giron wrote on Facebook.

"One day Mr. Abner decides that he is going to allow some hipster transplant named London Kaye to paint on our wall without asking permission because—as she said in an interview with the Bushwick Daily... she wanted to 'claim the wall for herself' in order to 'express herself.'"

"Having the wall for herself" was actually the Bushwick Daily reporter's language, but Kaye has since confirmed that she asked Abner for permission to make a crochet mural without first inquiring with the building.

Giron recently informed Abner by e-mail that his aunt was planning to do some work on the building in October, and that the crochet would have to come down. The next day, he called Abner to follow up.

"Abner started to yell at me, curse me, and even threatened to call the city on my family because one of my aunts sells Salvadorian food on the front yard," he wrote.

According to Giron, Abner said to him, "Besides: We've just raised your property value."

Abner later sent an apology e-mail in regards to the mural, conceding to take down the piece come October. He has since denied that he ever "yelled" or "cursed" at Giron. 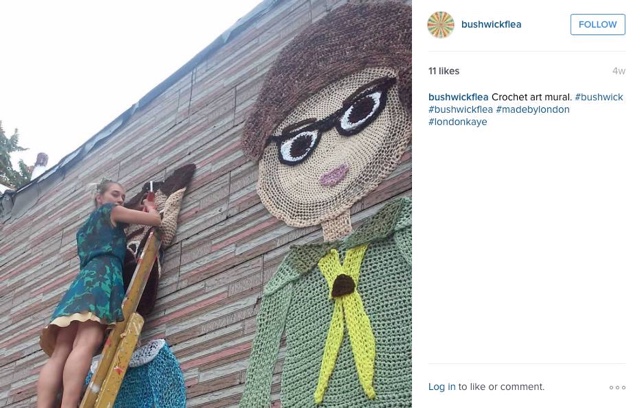 Bushwick Flea deleted this post in response to negative comments in the last two days.

In the days following Giron's Facebook post, the Bushwick Flea Instagram received a flood of angry comments, and Abner deleted his "Moonshine Kingdom" installation picture. Giron's story has been shared 1,118 times as of this writing, and has prompted a heated discussion on Reddit. Kaye has received angry e-mails, as well.

Reached by phone Thursday afternoon, Abner hurriedly said "no comment," then changed his mind. "I didn't think for a second that anyone would care, especially the tenants," he said.

"There was already graffiti on that wall," he said. "Nasty graffiti. What we did with the crochet art, is we covered up nasty graffiti with nice graffiti."

"Before we took over three months ago that [lot] was a junkyard, and we cleaned it up and made it a space with a garden and artwork," he added. He also said that the 15-foot artwork was "not visible" from the front of the building.

Kaye herself sounded bewildered when we spoke. "I guess I was just mostly surprised," she said. "Especially because it's all made of yarn, and I use yarn as my medium because it's such a nondestructive piece of the environment, unlike spray paint or regular paint."

"It's just three [kids] standing together, and finding love in unexpected ways," she added. "The last thing I was thinking about was making somebody upset with my art. The whole thing I wanted to do was make people happy."

However, Kaye did admit that she received a "kind of nasty" e-mail from someone in the building soon after she installed her piece. Rather than respond, she asked Abner about it. When he said not to worry about it, she deferred to him.

"You know I can't do anything about that," Abner said when asked if he felt culpable in the gentrification of Bushwick. "I'm culpable in taking a junkyard that was horrible and disgusting with rats. It took weeks to clean up, so I don't know how anyone could object to that."

Kaye has lived in Brooklyn for four years, and in Bushwick since January. Her current apartment is down the block from the flea. "The Jefferson subway stop is right here," she said. "Obviously things are happening here, and people aren't happy about it." But, "One wall being the sole example of [gentrification], I don't get. The whole neighborhood is filled with street art, and things go up and down every single day. It's what makes me love the neighborhood."

"Knickerbocker Park is now a place where white folks can walk their poodles even after the sun goes down, whereas I and many other folks that I know were being stopped and frisked on our way home by the police in that same park," Giron wrote in his Facebook post.

"Consider the fact that it's art when white people put up murals on private property, but when we create our own art in Bushwick it's considered 'vandalism.'"

We asked Abner if he could recall what the original graffiti on the side 56 Wyckoff looked like—the spray paint that's now covered with Kaye's crochet.

"It had some ugly, illegible, black writing," he said. "They can have their blank wall back in October with the ugly graffiti, that's it."

We reached out to Giron, who declined to comment pending a discussion with his family members, who share his address. We’ll update if he agrees to talk.

Department of Buildings spokesman Alexander Schnell confirmed that there are provisions in the NYC Zoning Resolution that prevent illegal signage from being placed on private property and fences. He suggested that Giron report the crochet to the DOB, so that the inspector can "investigate the conditions and issue violations as warranted."

UPDATE: We spoke with Giron about the symbolism of Kaye's yarn bomb this morning. Read more here.

UPDATE: Our first report made reference to an "apology" e-mail that Giron received from Abner shortly after the two men spoke over the phone about the crochet mural. During that conversation, Giron says that he asked Abner to take down the mural, and Abner responded by threatening him. Abner has since issued a statement saying that he never threatened Giron, and that the e-mail apologized for not asking permission to put up the mural in the first place.

Giron also says that Abner's "We-just-raised-your-property-value" line was not included in an e-mail from Abner, as was originally reported. (Perusal of Abner's e-mail to Giron confirms this.) But Giron insists this statement was made over the phone. More here.

#art
#bushwick
#Bushwick Flea
#colonizers
#gentrification
#graffiti
#original
Do you know the scoop? Comment below or Send us a Tip