This Website Lets You Warn The World About Your Crappy Landlord

There's a lot to consider when looking for an apartment—location, rent, window size, whether or not you can make do with a kitchen shower. But one thing New Yorkers, particularly ones new to the city and/or with limited means, often fail to adequately investigate is the landlord renting to them. I've lived in four apartments in Brooklyn in the last six years, and the maximum research I did on each property owner or management company I signed a lease with was check the building's address on the Bedbug Registry. (I still got bedbugs.)

But in a city full of bad landlords, it's worth doing a little extra research on your landlord, if only to determine whether they'll send a real plumber or their wife's idiot cousin to come fix the giant leak that managed to tear through your ceiling last night. To this end, two New Yorkers are hoping their grammatically-confusing landlord rating website, Whose Your Landlord, will help.

As first reported by Curbed, Bedford-Stuyvesant residents Ofo Ezeugwu and Felix Addison came up with the idea for Whose Your Landlord while in college in Philadelphia. They noticed that their fellow students were living in apartments owned by some less-than-trustworthy souls, who seemed to be taking advantage of their tenants' naïveté by jacking up their rent in gentrifying areas. Can you imagine such a thing!

So, Ezeugwu and Addison set about creating a landlord review site, in which tenants could warn their peers about advantage-taking landlords, and recommend the more scrupulous ones. That operation expanded to New York when Ezeugwu and Addison moved here in 2013. Now, they've got a slew of realty companies in Manhattan, Brooklyn and New Jersey on their site, with tenants leaving bad and good reviews alike.

"I believe it could change the face of apartment hunting in New York," Monteka Maddox, who has used the site, told Curbed. "I think a lot of landlords and slumlords get away with providing bad living standards because renters aren’t avoiding them. But if you go to a restaurant, and see it only has two stars, that’s on you… but at least you were warned."

It's noteworthy that you can actually look up some management companies on Yelp. Below, for instance, is one review of the company that ran my former hovel in Bushwick. What fun! 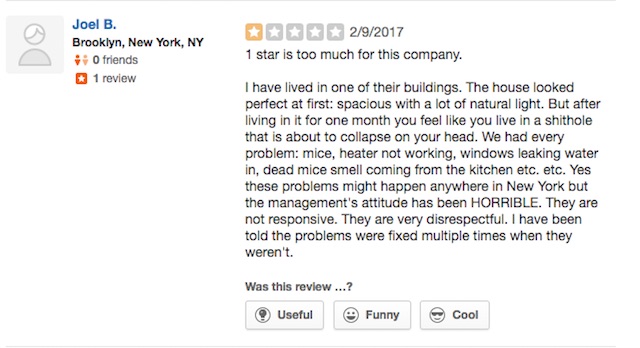 But WhoseYourLandlord is far more comprehensive than Yelp, which has its limitations. And though it probably won't do much to legally combat garbage landlords, whose notorious tenant blacklist keeps a lot of disadvantaged renters from taking bad actors to housing court, Ezeugwu and Addison hope that the fear of earning a bad reputation and, therefore, potential future vacancies, will keep landlords on their toes. "For bad landlords, there should be a naming and shaming," Ezeugwu said. "If you’re a bad landlord, people should know that."

Getting called out hasn't done much to hurt these guys, but, hey, every little bit of fight helps, right?

#landlord
#rent
#the rent is too damn high
Do you know the scoop? Comment below or Send us a Tip