This Private Beach In Queens Has Perennial Poop Problems

For residents of an exclusive community in Queens, swimming comes with the thrill of risking illness and basic hygiene.

Douglaston Manor’s two block stretch of private beachfront on Little Neck Bay is a selling point of the neighborhood: Homes currently for sale on Zillow — going for up to $6.3 million — advertise the “prestigious waterfront community” and “privet beach.”

But according to data published by the city’s Department of Health and Mental Hygiene (DOHMH), Douglaston Manor beach is one of the most consistently contaminated beaches in New York City.

Every year, beginning in the spring and ending in the fall, the DOHMH updates its dataset on a monthly basis with water quality results from beaches all around the city. In particular, they test their water samples for enterococci — bacteria that indicate of the presence of human fecal material. By New York State Sanitary Code and New York City Health Code, no single sample should exceed a count of 104 cfus (colony forming units) per 100 mL of water for marine water recreation. If the geometric mean of five or more samples taken in a month exceeds 35 cfus per 100 mL, the beach is closed to swimmers and waders. Swimming in such polluted waters can lead to gastroenteritis or more serious diseases. 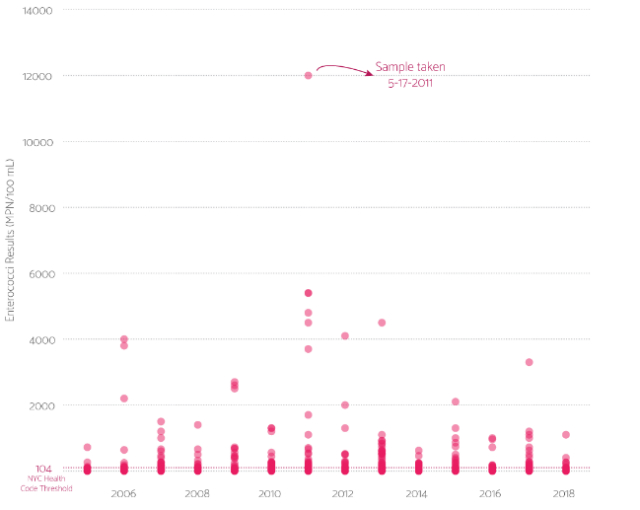 So far in 2018, 17% of the samples collected in Douglaston have exceeded health code — one by over 11 times the safe limit. But 2018 is actually an improvement: last year 31.7% of the samples collected in Douglaston were found to exceed safe levels of enterococci, translating to 107 notification days: more than any other private or public beach in New York City. The beach was under advisory for the entire season.

A nearby sewer overflow facility, completed in 2011, has decreased sewage flow into the bay, but fecal bacteria are still finding a way to contaminate Douglaston Manor beach. The high bacteria counts go as far back as 2005, the first year data was published for the beach; one sample taken in May of 2011 was over 11400% higher than the warning threshold, making it the second most contaminated sample in the entire dataset. (Staten Island’s YMCA beach takes the record, with a sample taken in August 2013 containing a bacteria count of 15,000.)

Despite the warnings, the pollution doesn’t seem to faze long-time residents of the neighborhood. According to Angeline Panagi, who works at the Douglaston Manor gatehouse, about 20 swimmers dive into the water every day. “A lot of the people in the neighborhood have been swimming here for years and years, so they don't really pay attention [to the warning signs],” Panagi said. Newcomers may be deterred by the advisories, but regulars don’t bat an eye. “I’ve swam in the bay for 63 years without any negative effect,” Mike Gannon, a Douglaston old-timer, told me via email. 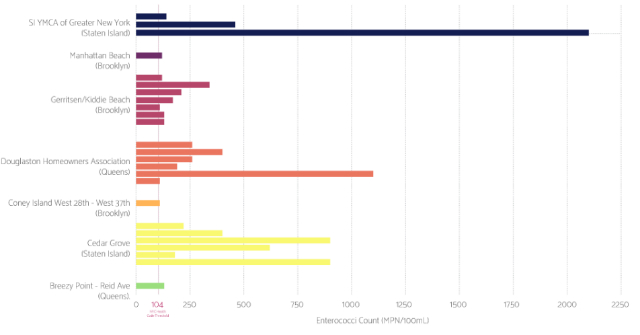 Other beaches you might want to be leery of for the rest of the summer (city beaches are open through September 9th) include Staten Island’s Cedar Grove and Brooklyn’s Gerritsen/Kiddie Beach, which historically tend to be more polluted than other beaches in the city.

The good news is that New York City’s most popular public beaches — Coney Island and the Rockaways — are generally pretty clean. Only one sample at each beach, taken out of 72 and 51 respectively through July of this year, have failed to meet health standards. 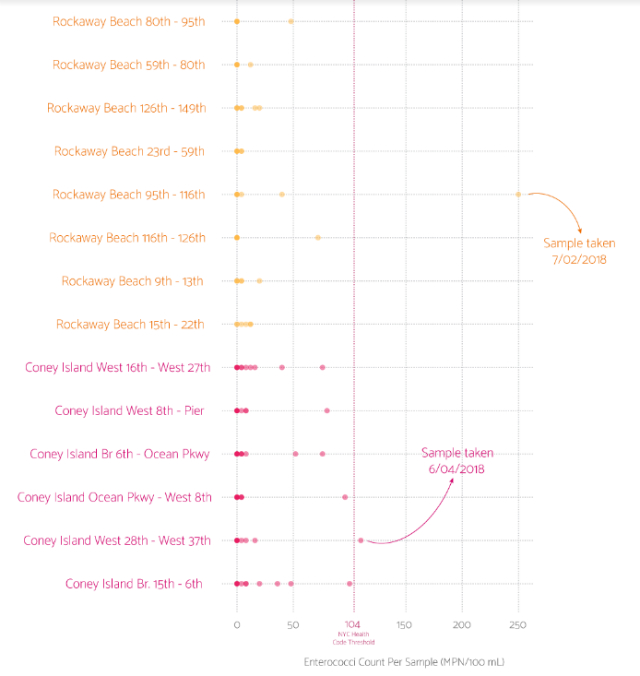 2018 Water Quality Samples at Coney Island and The Rockaways (data from DOHMH, chart by Angela Wang)

If you’re wary of stewing in human excrement at your next beach outing, the city posts the latest status updates on beach water quality here. (Protip: Avoid water recreation after it rains, when storm runoff and overflowing sewage pipes discharge directly into the city’s waterways.)

Angela Wang lives in Brooklyn and sometimes writes and makes things. Follow her most places @angelareplica.

#beaches
#Douglaston Manor
#poop
#original
Do you know the scoop? Comment below or Send us a Tip