This Man Nearly Went To Jail For Photographing Paramedics

On November 30th, 2011, a man jumped in front of a train at the 23rd Street F/M station. J.B. Nicholas, an NYPD credentialed photographer and paparazzo, arrived to take photos of paramedics rescuing the man, and was arrested by Port Authority police for obstructing governmental administration. After two trials, a hung jury, and the mysterious absence of a police witness, Nicholas was finally acquitted of the charge last week.

Despite the law clearly permitting photography of police and rescue personnel performing their public duties so long as there is no physical interference, it's not uncommon for journalists to be arrested on the job. Still, Nicholas's case was unusual.

His first trial ended in a hung jury last June. The vote was 5-1 to convict. "At one point this woman from the jury came out on the second day of deliberations and told the judge, 'We're having a problem. One of the jurors is no longer participating in conversations because he's saying the police in this case are acting like they do in Russia,'" Nicholas explains. "She said it to try and get him removed for some language barrier, but the judge shot that down."

Nicholas's case was then given to Legal Aid attorney Lamar Miller, who reviewed the testimony against his client.

While the MTA has few restrictions for public photography on its property, the Port Authority's rules are much more stringent: "Media cannot go beyond the fare gates of any PATH station without a Port Authority-provided escort."

The man had jumped from a PATH platform, and was taken to an MTA platform. Nicholas was on MTA property when he was attempting to take photos underground. Yet PAPD officer Mark Kopczynski had testified that Nicholas had gone within "one or two feet" of Port Authority property.

The MTA had video of Nicholas' altercation with officers underground. "I had an investigator measure how far he was from the Port Authority entrance, and it's 22 feet. He's nowhere near the entrance to the PATH," Miller says. Officer Kopczynski would have difficulty testifying that the photographer was breaking Port Authority rules before he turned his video camera on, because he also testified that the first time he saw Nicholas was when he was shooting photos on the platform.

"This cop essentially lied with respect to the distance as to how close Mr. Nicholas came to the entrance," Miller said. " 'A foot or two,'—that just never happened."

When Officer Kopczynski was subpoenaed to testify at the second trial, he was a no-show. "There was some talk of him having a death in the family," Miller says. "So I was treading as lightly as possible. When I asked the sergeant involved in the case, 'Do you know who died? Was it a brother, a family friend? Do you know when they died?' he couldn't answer me. They had been calling him and texting him, no one knew where he was."

Another police official said he believed that Kopczynski was on vacation leave. "It sounds like he's ducking the subpoena," Miller concludes. "[The trial] couldn't have gone well for him." 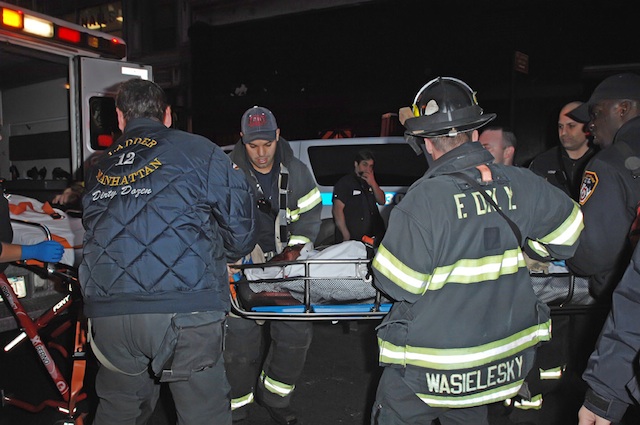 Yet Nicholas's case in large part hinged on the video taken underground, as well as a photo he shot of the victim being loaded into an ambulance, shortly before his arrest. It's precisely the kind of picture that is taken legally and routinely by photographers across the city without interfering with law enforcement or paramedics. "No one's even looking at him in the photo," Miller adds.

Obstructing governmental administration is a class A misdemeanor and carries a sentence of up to one year in jail, thus the Manhattan DA's office could not reduce the charge to prevent a jury trial.

It's unclear why the Manhattan DA's office continued to press on with Nicholas' case despite the amount of evidence in his favor.

"I have a criminal record, so maybe they made me an easy target," Nicholas says. A manslaughter conviction in 1990 resulted in Nicholas serving 13 years in prison. Once released, he got a degree at NYU, but no one would hire him, so he started taking photos. "I'm an independent journalist," Nicholas adds, pointing to the video taken portrays the police in an unfavorable light. "I'm gonna tell the truth regardless."

"It raises the question of malicious prosecution, where you know there's no way you're going to satisfy all the elements of the charges and yet you still move forward with the case," says Mickey Osterreicher, the general counsel for the National Press Photographer's Association. "These types of events don't constitute obstructing governmental administration, and yet we continue to see charges being levied. Who's gonna end up paying for it? The taxpayers."

A spokeswoman for the DA's office declined to comment on Nicholas' case.

Nicholas, who has since been accosted by police for taking photos, says he always takes video while he's on a news assignment. He's also thankful for the one juror in his first trial who refused to budge.

"After the trial, he kept coming into court with a brown lunch bag, and I figured as long as he brings that bag in, I'm OK. He's planning on lunch because he's not changing his mind."

Nicholas brought an American flag to give to the man when the case was adjourned, but the judge ordered the juror out first. "So I threw the flag to a friend of mine and he carried it out to the dude, and stuck it under his arm and said, 'You're a good man, and JB's a good man.' The dude didn't say a thing, took it, and walked out."