This L Train Car Was Off-Limits To Riders, Apparently Due To Bloody Bandages Everywhere

Months after riders reported seeing (and riding) a subway car with blood splattered on the floor, a straphanger came across an L train car with the same issues.

Reader Susan Key sent us the above video of what she said was an L train at around noon on Monday. As you can the see, the doors of the car refuse to open, and for good reason, given what looks like a pile of bloody bandages and paper towels and also a puddle of mystery liquid. 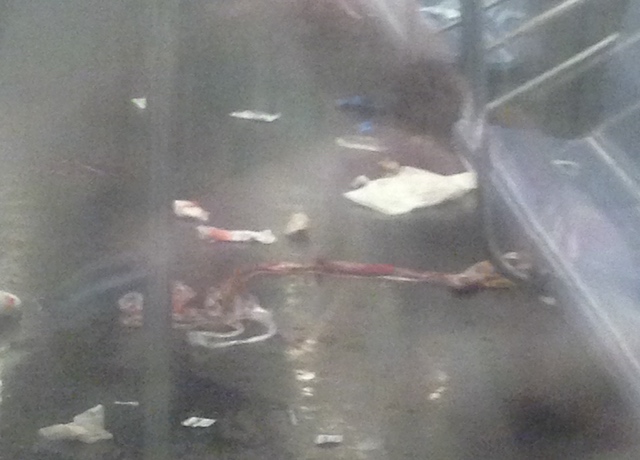 Key told us that her fellow straphangers barely seemed to notice the mess in the next car.

"I started taking a lot of photos of the mess through my car's front window, and this piqued the interest of some commuters. I noticed two reactions: one man looked, shook his head and smiled, and a couple of other people looked, then went then went back to their cell phones, unfazed."

The video itself was taken when she exited the train at Montrose Avenue.

MTA spokespeople did not respond to a request for comment on the video.

Anyway, how about that subway turnaround plan???