'This Is Not Justice': Japanese Family Settles With NYC But Condemns Handling Of NYPD Crash That Killed Student

The family of a Japanese college student who was fatally struck by a police officer in February 2013 has agreed to settle a wrongful death lawsuit with the city, following a lengthy legal battle that ultimately netted no punishment for the cop, despite video evidence that appears to contradict the NYPD's initial statements about the crash.

Ryo Oyamada, 24, had been living in New York and studying English for only three months when he was struck and killed by Officer Darren Ilardi while crossing a street in Queensbridge on February 21st, 2013. In 2015, the Oyamada family filed a federal lawsuit against the City, arguing that the NYPD orchestrated a cover-up after Ryo was killed. Initially, the NYPD claimed the officer's emergency lights were engaged when Ilardi struck Oyamada, asserting the officer was traveling in a marked vehicle while responding to a 911 knife assault call in the area.

But video from NYC Housing Authority security cameras, which attorney Steve Vaccaro obtained through a Freedom of Information Law request, appeared to dispute Ilardi's claim, and at a Department of Motor Vehicles safety hearing in 2015 Ilardi himself admitted to cutting his lights shortly before striking Oyamada, calling it a "tactical" maneuver. "I cut the lights off," he said. "The next thing I know there's somebody in front of my car, I tried to swerve out of the way, and I struck the pedestrian." 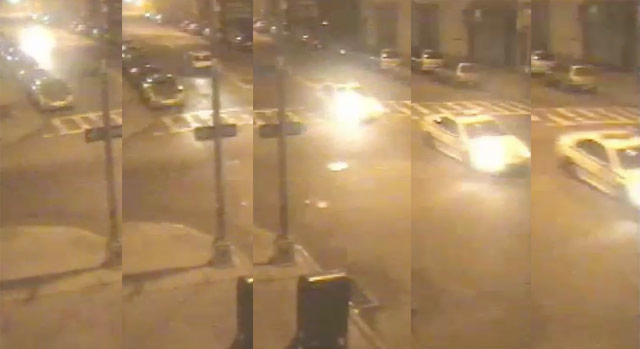 NYCHA video suggested Ilardi's vehicle did not have its lights engaged when it struck Oyamada.

Vaccaro also accused the NYPD of dispersing witnesses at the scene, discarding further video evidence, failing to measure skid marks, and not checking Ilardi's cell phone records to ascertain whether or not he was using his phone when he struck Oyamada, according to the lawsuit. The $8 million lawsuit also suggested Ilardi had a poor driving record, for which the NYPD failed to sanction him.

In addition, the Oyamada's lawsuit cited radio transcripts and other evidence provided by the City to indicate that Ilardi "was not assigned to the disturbance, he did not tell anyone he was responding to an emergency, and that two other NYPD units had already been assigned to the call, which was later deemed to be unfounded," Gothamist reported in 2014.

An administrative law judge with the DMV ultimately declined to take action against Ilardi, ruling the fatal collision "unavoidable." No representative from the city has ever apologized to the Oyamada family for Ryo's death, and the family was compelled to sue the NYPD for detailed information about the crash.

"I can't believe this is happening in New York City, the city of democracy, in 2014," Ryo's sister Tomoko Oyamada said in NYC a year after her brother's death. "We want to know the truth. We just want to have some kind of honest explanation of what happened to Ryo,"

An accident reconstruction report paid for by the plaintiffs and constructed based on materials obtained via FOIL found Ilardi's car had likely been traveling at 64.6 mph shortly before striking Oyamada, "a conservative estimate of 34 mph over the statutory speed limit of 30 mph, or over twice the speed limit," per the report. The report determined Oyamada "did not appear to be acting in a reckless manner," though initially the NYPD suggested he "walked into the vehicle's path of travel" while crossing midblock. Indeed, the report concluded that there was "no evidence that Mr. Oyamada jumped out into the path of the oncoming Police car," contradicting Ilardi's testimony that "Oyamada was 'shimmying left and right' indicating that Mr. Oyamada was trying to get out of the path of the oncoming vehicle."

Oyamada--10th and 12th Street Cameras from Vaccaro and White on Vimeo.

The report found that in addition to driving significantly over the speed limit, Ilardi was also driving outside the designated travel lane. Two additional factors the report suggests contributed to Oyamada's death have been redacted, and are not available under FOIL. "Any one of the four causes of this incident...on their own could have caused this incident. However, the combination of all four represented a reckless disregard and represented an extreme risk to life to all proximate to the path of travel," the report reads.

The report also noted that "[t]he activation of sirens or turret lights would have been helpful in preventing this incident by helping Mr. Oyamada differentiate an oncoming Police car as being different from a normal vehicle in operation."

In a statement released yesterday, the Oyamada family expressed anguish over the NYPD's apparent lack of transparency in investigating Ryo's death, decrying a "lack of political will" to hold the department accountable for what the accident reconstruction report deemed preventable.

When Ryo was killed, we flew immediately to New York City. When we met Ryo's body, our mother asked ‘How was Ryo killed with such gruesome damage to his body by a speeding police car in a residential area?’ It didn’t make any sense then, and after over four years, it still doesn’t make sense. The NYPD officers in the patrol car were not responding to an assault in progress and had not activated their emergency lights, even though the NYPD claimed the opposite in its initial accounts. Findings of forensic expert Peter Chen demonstrate Ryo was killed in a preventable crash.

After over four years, we have decided with heavy hearts to accept a settlement of our lawsuit against the city for his death.

This is not justice, and Officer Darren Ilardi should be held accountable for killing Ryo, as he sped recklessly next to public housing where children, families and pedestrians are always walking.

As the city continues a Vision Zero plan to reduce preventable traffic deaths, it is unfortunately exempting NYPD officers from following the rules and being held accountable for pedestrian deaths.

New Yorkers should understand that nothing has changed in the NYPD to prevent this from happening again. Officer Darren Ilardi, who was driving the vehicle when it hit Ryo, has not faced any meaningful consequences and the NYPD and City of New York have let him escape accountability for his actions.

This lack of justice and accountability pervades the NYPD’s handling of the crash that took Ryo from us.”

Vaccaro told Gothamist that the Oyamadas had hoped an investigation into Ryo's death would help prevent future vehicular deaths at the hands of the NYPD, but were disheartened by the department's unending red tape. "They wanted changes made so there were not more young people killed senselessly in these preventable crashes. At the end of process they were very frustrated," he told us.

"We made a number of proposals to city, increasing awareness and accountability for officers, procedures for greater accountability, changes to road design, trying to get facts out to what happened," Vaccaro said. "The redactions and report show the city was very firm with their position that they were not going to agree with non-economic proposals, and not going to entertain disclosure of evidence developed in the discovery process. The city doesn't think that the facts of incident like this should be made public."

He added, "That's something that was very difficult to explain to my clients from Japan. They were very surprised by the cloak of secrecy involved with an incident like this, with a police officer on duty. I don't think that the secrecy helps us avoid more tragedy." Indeed, Vaccaro said, "To the contrary, I think it means this will continue to happen and the city will pay out money in settlements, but I don't see progress being made in preventing them from happening."

When contacted for comment, the NYPD referred Gothamist to the City Law Department, whose spokesperson told us, "This was a tragic incident. Settling the litigation was in the City's best interest." The City Law Department tells us the Oyamadas received a settlement of $540,000.

Mayor Bill de Blasio, who has made reducing pedestrian deaths one of his signature initiatives, did not respond to a request for comment.

#nypd
#queensbridge
#ryo oyamada
#steve vaccaro
#vision zero
#original
Do you know the scoop? Comment below or Send us a Tip