"This is Kevin Sheekey; I'm REDACTED, but Please Leave a Message" 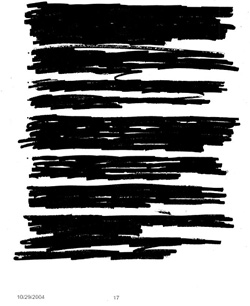 Mayor Bloomberg's continued insistence that he is not currently running for President is bordering on the absurd, as even attempts to ascertain where his aide Kevin Sheekey is spending his vacation time turns up blacked out in official requests. Sheekey is Bloomberg's chief political deputy, and the man most closely identified with pushing the Mayor forward in a Presidential bid. The New York Times filed a Freedom of Information request with the Mayor's office to see what Sheekey had been up to around the time that Bloomberg excused himself from the Republican party. The results were less than revealing.

The provided schedules only led to the time when Bloomberg renounced his party membership, which press secretary Stu Loeser stated was due to the high demand for the records in question. Still, Sheekey's itinerary and schedule was highly redacted, blotting out potential meetings with power brokers around the country. According to the New York Post, Loeser said that much of the lost time in Sheekey's schedule was personal time taken during the middle of workdays, and was unavailable for work security reasons.

In 2006, Sheekey described his job responsibilities: "My priorities are the mayor's priorities - my job is to do what he wants to get done." We totally have to get one of those guys.