This Is How NYC Schools Teach Kids About 9/11

When Robert Sandler saw the flames shooting from the south tower of the World Trade Center on September 11th, 2001, he ran to work. Then a 23-year-old teacher at Stuyvesant High School in Tribeca, Sandler said he had only one thought in that moment: "I don't want my kids to get hurt."

Panic set in shortly after he arrived. As teachers turned on their classroom TVs and learned of the attack, students linked hands in frantic prayer circles. Administrators stood on tables, shouting through megaphones as they directed students to evacuate. Sandler watched as smoke barreled toward the building and the FBI rushed in.

Fifteen years later, the kids Sandler was so afraid for are well into adulthood. And his classes at Stuyvesant—three blocks from where the Twin Towers once stood—are made up of children who have little or no memory of the worst terrorist attack in United States history.

"That's what shaped our whole world. There's no Iraq War without 9/11, no Bush second term, no Guantanamo, no mass surveillance state, no ISIS. It all stems from that," he said. "And it's right here."

When Sandler, or any educator in New York City, teaches his students about 9/11, he faces a unique challenge: How do you teach such an intensely emotional, local event to a generation of kids who don't have any first-hand frame of reference for it? Teachers across grade levels described the difficulty of making 9/11 relevant to their students, most of whom were born after the attacks took place.

"It takes a lot to punch through to a teenager and make them emotional," said Sandler, who was honored by the 9/11 Tribute Center for the unit he teaches about 9/11. "When they have my class they really walk away with something, I think, significant."

The New York State Education Department's social studies framework, which the state disseminates to districts to support curriculum development, includes 9/11 in the coursework for eighth, 10th, and 11th grades.

Eighth graders are required to examine the attack's impact on national security, looking at events like the creation of the Department of Homeland Security. In 10th grade, students analyze 9/11 alongside international trade in weapons and cyber war. In 11th grade, one history lesson focuses on how the attacks affected the United States politically, examining issues like the declaration of a "War on Terror," the decision to invade Iraq and the passage of the PATRIOT Act.

Each September, the NYC Department of Education provides educators with a list of resources to help them teach 9/11. At the top of the list are the 9/11 Memorial's suggested lessons, grouped around the themes of community and conflict, heroes and service, historical impact, and memory and memorialization.

"This day holds a very meaningful place in our collective memory, especially here in New York, and it's imperative that students and teachers have the opportunity to discuss these events in a respectful setting where they feel safe and supported," Eric Contreras, Stuyvesant principal and former executive director of social studies for the DOE, wrote in a statement to Gothamist.

"And because most public school students today were either not yet born during 9/11 or are too young to remember that day, it's also crucial that the educational resources we provide approach this topic not just from a historical perspective, but as an occurrence that still shapes current events, and brought New York together."

Despite having these formal options, many New York City teachers have developed their own approaches to the topic, tailoring what they teach to students' ages and the increasingly slim knowledge of 9/11 knowledge kids have coming in. 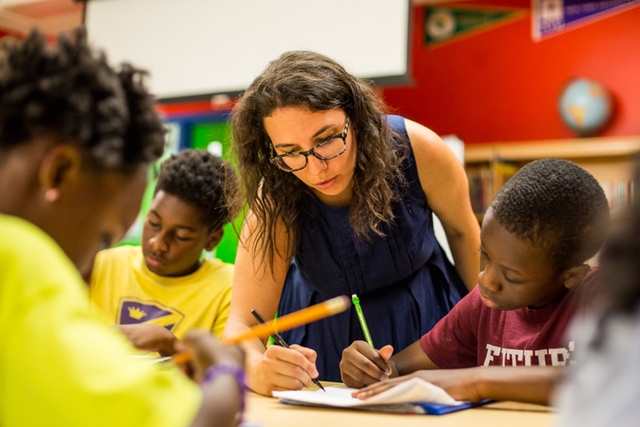 Sandler, for example, briefs his class on the architecture of the World Trade Center and then leads a walking tour of downtown Manhattan that he calls "The 9/11 Memorial and Its Neighbors." The group stops by sites like the Castle Clinton National Monument and the Alexander Hamilton U.S. Custom House before coming to the 9/11 Memorial Museum. Sandler said his goal is to orient his students geographically, to give them a deeper sense of the place where the attacks occurred.

In Anna Bennett's fifth grade class at P.S. 59 Beekman Hill International School, her 10- and 11-year-olds come in knowing only the very basics: There was an attack on September 11, 2001, planes hit the Twin Towers and many people died. But they're often shaky on the broader significance of the events.

Bennett believes that while her students are young, they have the capacity to understand the political context of 9/11. "You do not want to instill fear by talking about what happened, but you do want to help kids wrap their heads around this event in history," she said.

In order to do this, Bennett tunes into what her kids are talking about leading up to the anniversary of 9/11. The message she's settled on in recent years is one of community bonding. With terrorist attacks a reality of life around the world, the topic, she feels, is perpetually relevant.

"It is my job to teach them about these events and how they fit into the bigger picture of our country's climate and decision-making," Bennett said. "On the other hand, I also desperately want them to know, feel and believe that their voices matter and that they, too, can make the world a better place, even when things seem grim and scary."

Bennett has found topical children's literature to be a helpful aid. She reads aloud books like Fireboat by Maira Kalman, which tells the story of a former FDNY boat that came out of retirement to help out on 9/11, and 14 Cows for America by Carmen Agra Deedy, about the Masai people's post-9/11 gift to the United States.

Sari Rosenberg, who teaches history to 11th graders at the High School for Environmental Studies, draws on multimedia materials for her lessons. She said in the past she's shown her class Vox.com explainers and TV interviews with families of 9/11 victims.

But her students provide the main resource for her lessons. Her first assignment each year is an oral history project where she instructs students to interview someone who remembers 9/11 and write an essay about their findings. The next time she sees them, the children share their stories with their classmates.

It sets a standard for the rest of the school year.

"The idea behind it is take this very important event, don't sensationalize it, but then make sure to let them understand the gravity of it, the importance of it, not just use it as some kind of gimmicky, trivialized 'Let's just talk about 9/11 because everyone's talking about 9/11,'" Rosenberg said. "It's not just boring history in textbooks—it's affected lives."

Educators strive to impress this upon their students—that 9/11 shaped the city and the world they live in, and that it profoundly affected the adults around them. Teachers like Sandler and Amy Berman, who teaches sixth grade at Achievement First Crown Heights Middle School, have found that personal stories of that day really resonate with students.

"When I say, 'I'm going to tell my 9/11 story,' it kind of makes kids go ahead and sit up themselves and tune in," Berman said.

Berman shares her recollections each year during a unit on world religions. After teaching about the Prophet Muhammad and the five pillars of Islam, she tells her class about 9/11: how she learned about the attack as a freshman getting breakfast in the University of Wisconsin - Madison cafeteria and immediately walked back to her dorm room to watch the news.

She uses it as a jumping-off point to talk about the concept of jihad. While the term is often translated as "holy war," it literally means "struggle," and is generally interpreted in Islam as referring to internal spiritual struggle.

Berman explains to her class that most Americans' knowledge of jihad comes from what they learned on and after 9/11. Her goal is to get her kids to come away seeing the nuances in the definition. 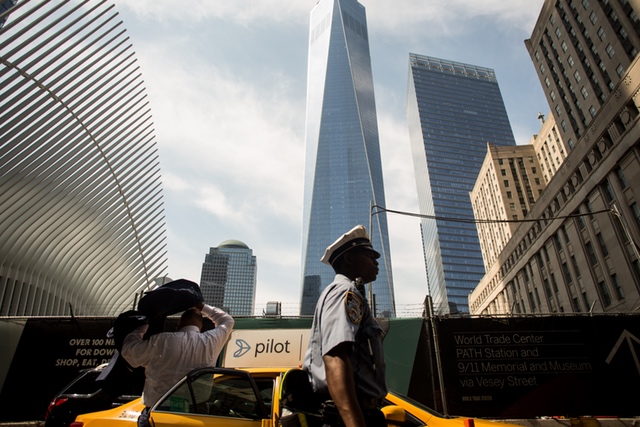 "It's about getting kids to think about when a person says 'jihadist terrorist,' what are they talking about? Do we fully understand what this term means?" Berman said. "The interpretations of jihad are actually different and depend on the source itself."

Mike Fox, who teaches seventh and eighth grade social studies at the Anderson School, P.S. 334, also seeks to push his students to think critically about the aftermath of 9/11, and the U.S. political response to the attacks.

As he talks his class through a lesson on 9/11, he displays a PowerPoint of images. When he lands on the slide that shows the faces and nationalities of the hijackers, he always asks his students what they notice. Then he waits until someone pipes up asking why, if the attackers were from mostly Saudi Arabia, the U.S. later invaded Iraq.

Fox said this is his educational ideal—students synthesizing the material and building their own understanding of the world around them.

"It's very strange to be standing there talking about a bit of history that you lived," he said. "Being able to say 'I was there,' you feel different about it."

Julia Glum is a reporter specializing in youth culture. She lives in Crown Heights.

#9/11
#education
#september 11
#teaching
#longform
#original
Do you know the scoop? Comment below or Send us a Tip