'This Is Ethnic Cleansing': Immigration Lawyers Work The Graveyard Shift At JFK Amid reports that the number of immigrant detainees at John F. Kennedy Airport has dropped off significantly, a coalition of volunteer attorneys is still working at Terminal 4 this morning, after tag-teaming throughout the night to greet arriving flights from Europe and the Middle East.

Over two-dozen attorneys were stationed at Central Diner in Terminal 4 at 4:30 this morning. Since Saturday, Central Diner has become an impromptu headquarters and dispatch center for the fluctuating group, which also includes volunteer translators.

"This is insane," attorney Marissa Ram, 32, told Gothamist this morning. "I'm an immigration lawyer and I've worked with people who are refugees and seeking asylum in the U.S.. I've worked in other countries, and I've never seen anything like this. This is ethnic cleansing that's going on. This is about exclusion."

Entering the third day since President Donald Trump signed an executive order temporarily barring entry to refugees and visa holders from seven majority-Muslim countries, the Department of Homeland Security has reportedly stated that all detainees across the country have been released (DHS could not immediately be reached for comment). Addressing reporters at JFK last night, New York Congressman Joe Crowley (D) said that DHS had informed him there were six detainees under the Executive Order, all of whom were being processed and released—a procedure expected to take two-and-a-half to three hours.

But lawyers who say they've been working directly with the families of detainees said there was a higher number of detainees throughout the weekend. Based on their records and communication with families, they released a statement early Monday morning that 41 individuals have been released from JFK since the EO went into effect, with one individual still currently in detention and two reportedly sent back to their country of origin on flights.

The count has shrunk significantly since last night, when attorneys estimated 20 detainees in total.

41 immigrants were detained in JFK this weekend. Multiple for over 24 hours. Here are some of their experiences: https://t.co/TVGF24NAAA

Attorneys say they will continue to provide legal support today, filing habeas corpus petitions on behalf of detainees—lawsuits that argue an individual is being illegally detained.

We still need volunteers. Sign up here: https://t.co/CqSagcWTP3. If you speak Arabic, Farsi, Urdu, or Somali your services are needed!

"We're trying to keep a presence at all of the different terminals, making sure that all of the families who are waiting can connect to us," said Camille Mackler, director of legal initiatives for the New York Immigrant Coalition, on Sunday night. As for the arriving passengers, "We're asking them if they want to file habeas [corpus] petitions, we're taking affidavits, and we're filing restraining orders if necessary."

Attorneys have said that accumulating as many habeas petitions as possible will bolster the ACLU's lawsuit against the federal government, which argues that Trump's travel ban is unconstitutional. Arguments for that case are due February 21st. Federal Judge Ann Donnelly granted an emergency stay on Trump's executive order late Saturday night, but the narrow ruling disallowing detainment at airports doesn't override the travel ban itself.

President Trump issued a statement late Sunday. "This is not about religion—this is about terror and keeping our country safe," he said. "There are over 40 different countries worldwide that are majority Muslim that are not affected by this order. We will again be issuing visas to all countries once we are sure we have reviewed and implemented the most secure policies over the next 90 days." 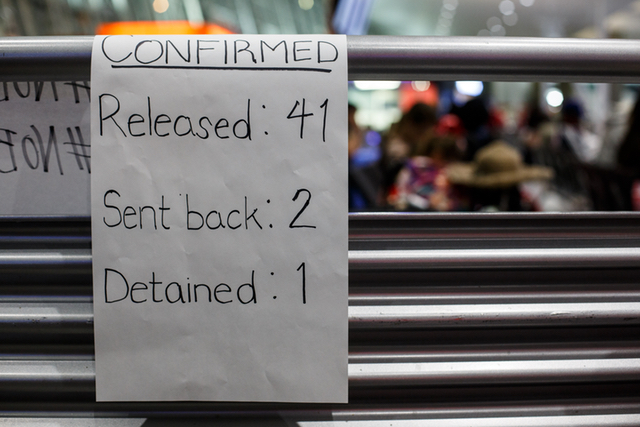 Even as the number of detainees dwindles, attorneys argued, the impact of the order has hardly diminished.

"The number of overall detained persons has been going down, we believe, because individuals from the affected countries of origin are either not being allowed on their respective flights or are choosing to cancel their travel plans to the U.S in fear of detention," the coalition said in a statement Monday.

Hours after that statement, attorneys said an Iranian man with a Green Card was detained and held for three hours at JFK after arriving on a flight from Morocco. The man is a lawyer, they said, and has lived in the US since 2009. He was questioned about his trip, family and career.

DHS also stated its intention to work with private airline companies to prevent banned individuals from boarding flights to JFK in the first place.

"[We are] working closely with airline partners to prevent travelers who would not be granted entry under the executive orders from boarding international flights to the U.S.," DHS stated.

"It's just an effort to quell the organizing in the airports where people are waiting for immigrants to come," Ismail surmised, referring to the shift in focus to foreign airports. "Now there isn't even going to be anyone to wait for [at JFK], because they won't be getting on the plane."

#airport
#attorneys
#JFK
#lawyers
#muslim ban
#original
Do you know the scoop? Comment below or Send us a Tip