This Incredible 'Pollen Bomb' Video Is Nothing To Sneeze At

We all laughed when M. Night Shyamalan thought Mark Wahlberg was credible as a high school science teacher on the run from mother nature in 2008's The Happening. Plants are trying to kill humans...through wind? Hilarious! But guess what? It turns out The Happening was a documentary, because nature is sick of our shit and ready to blast our sinuses to hell with pollen bombs.

Don't believe us? Just go outside and try shaking a tree and see what happens:

Millville, New Jersey resident Jennifer Henderson captured the video after her husband Eric noticed a large accumulation of pollen on a tree as he was clearing brush. He decided to tap it with a backhoe to see what happened, and voila, you're probably sneezing in your chair just watching this video.

"Pollen bombs" like this are caused when plants are not able to flower due to extended periods of winter—once the weather warms up, as it has in our area over the last few weeks, it causes more pollen to be produced in a much more condensed period of time. It's not so unusual though: a bomb like this often occurs this time of year when a combo of tree and grass pollen kick into high gear at the same time. (Pollen count remains very variable during this season, even within the same week.)

But if you're sitting there thinking, "pssssh this is New Jersey's problem, go back to NJ stupid pollen, New York air quality rules and is not at all affecting me negatively!"... you're in for a rude awakening. 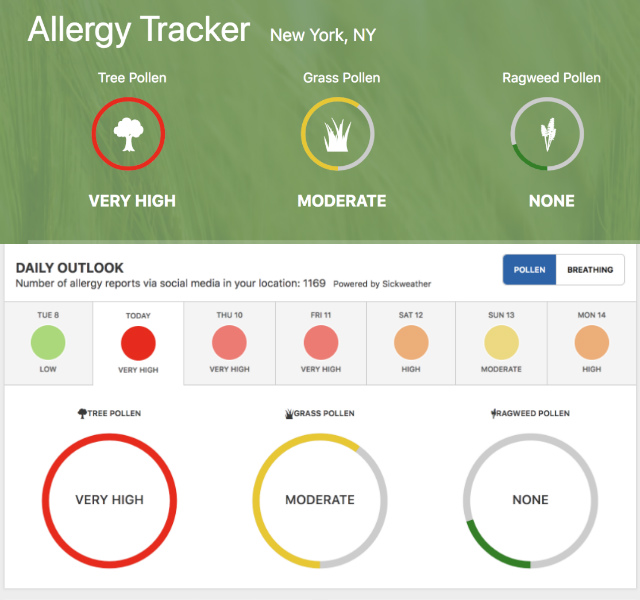 "This is the peak pollen season in NJ and Metro NY!" says Dr. Clifford Bassett, one of the leading allergists in the city. Asked about the video, he explains, "A pollen bloom coming off the trees that were disturbed exemplifies how it might affect a sensitive seasonal sufferer. Dry, windy days also increase pollen levels, and we are looking at a number of days of dry and warm conditions."

As for what allergy-hobbled NYers can do to deal with all the pollen, Basset says, "The key is to be proactive and pretreat your seasonal symptoms with a variety of approaches from OTC antihistamines and/or nasal steroid sprays." He added, "Also certain trees and plants are more likely to be a trigger for a sufferer, depending on their own sensitivity. Testing can help individualize your triggers and allow a pollen calendar to be customized for optimal relief. The pollen forecast is similar in NJ and NY at this point. Air pollutants can also aggravate and make certain pollens more likely to cause symptoms."

We reached out to the Parks Department to see whether they had any insights on our pollen-crusted nightmares. "I cannot confirm whether we are in a crisis at this time," said Parks Department spokesperson Crystal Howard, confirming our worst fears that we very likely may (or equally likely may not) be in a crisis right now. Whether or not we definitely are (or perhaps are not) experiencing the worst pollen crisis in NYC history (which, I must emphasize, we may or may not be experiencing), she noted that the effect of a single tree’s pollen is minimal, and the impact of NYC's tree planting program is tiny: "Only 1.7% of the population annually—and of these, only a very few species actually have a significant allergy impact."

She added that trees are very effective in cleaning the air of the city by absorbing gaseous pollutants (carbon dioxide, nitrogen dioxide, and sulfur dioxide), capturing air-borne particles (including dirt, dust, mold, and soot), and preventing the release of airborne pollutants (by reducing energy generation). All of which is to say, we have temporarily paused on our plans to go on a tree murder spree in Central Park, at least until the matter of whether this is or is not a pollen crisis is resolved.

#allergies
#allergy season
#new jersey
#nj
#pollen
#pollen bomb
#the happening
#trees
Do you know the scoop? Comment below or Send us a Tip