Since 2001, Chen Guanming has been on a 105,630-mile, worldwide tour to promote the Olympics. He traveled to 1,764 cities in his native China for the Beijing Games in 2008, then through 22 countries and on to London in 2012 in time for their 2012 Winter Games, and now he's working his way through the Americas for Rio de Janeiro in 2016. His mode of transportation? A 400-pound, three-wheeled pedicab rickshaw.

A few weeks ago Chen, 60, wearing a bright red T-shirt, black shorts and camouflage sneakers, his white hair tied into a ponytail, pedaled off a ferry from Hoboken and into Times Square, where he posed for photos. He then moved on to Chinatown, where he settled in for a few days among the bustling playgrounds and makeshift card tables of Sara D. Roosevelt Park.

"I'm traveling around the world to promote the spirit of the Olympics," he repeatedly declared in Mandarin to the gathering crowd, including regulars who stopped their card games.

As he spoke, a man emerged and pressed a folded twenty dollar bill into Chen’s hand and walked off. A few others followed with other gifts and donations, including a sandwich from a nearby bakery and a large bottle of water.

Having only one gear and weighing just over 400 pounds, the frequently recurring task of getting his rickshaw across mountainous terrain—or even the steep incline of the Queensboro Bridge—is truly one of Olympic proportion. To go uphill, Chen hops off, leans into a strap tied to the frame, and pulls.

"The most formidable mountains I've ever encountered were in the United States," he told the group in the park, many of whom stepped forward to feel his sinewy forearms. "Ninety-percent of the time I was pulling. The road only leveled off in New Jersey." 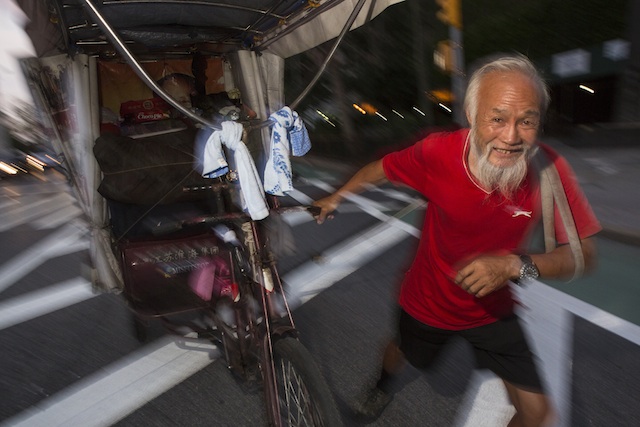 Chen demonstrates his method for getting up hills (Jessica Lehrman / Gothamist)

Downhill, he keeps a hand on the center brake lever and a foot on the swoop between the seat and the handlebars. With the breeze rushing through his beard, perched on a seat slightly higher than on an ordinary bicycle, he gets a chance to catch his breath and take in the scenery.

Chen first bought his rickshaw in 1998 for 760 RMB, or roughly $90. Before his journey began, he added a top frame that supports a mostly weatherproof vinyl enclosure. He keeps a few rags tied to the front to wipe the sweat from his brow and a flashlight attached to the handlebars serves as his headlight. A portrait of Chairman Mao peeks out from the back wall of the carriage.

The sides of his rickshaw are sheets of vinyl printed with a collage of photos of himself posing with locals in front of various scenic landmarks from around Europe and Asia, including the Rome Colosseum, the Eiffel Tower and the Petronas Twin Towers of Kuala Lumpur.

At night, the vinyl sides draw closed to create an unassuming shelter.

"I've encountered storms, heavy rains, earthquakes and landslides," he said. "The main thing is to not be afraid. Face your fears head on." 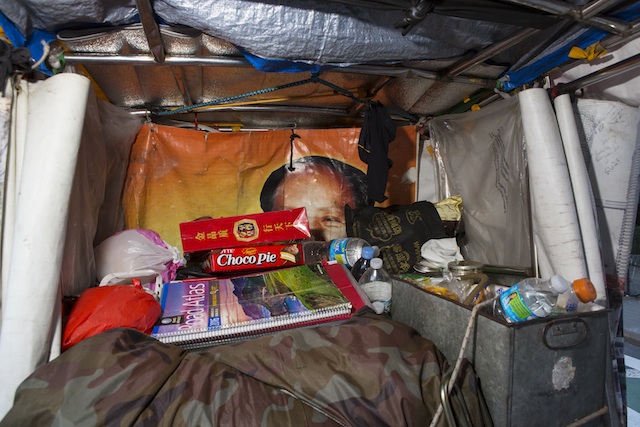 Chen is an unlikely hero for this kind of odyssey. Before 2001, he said he had never even dreamed of leaving his farming life in the backcountry of Xuzhou in the eastern Chinese province of Jiangsu. This is where his family had worked the soil for more generations than he even knows and where he was expected to continue the tradition. When he first told his parents and siblings—two younger sisters and a younger brother—of his ambitions to travel, they were less than supportive, he said.

"In the countryside back home, people are more concerned with farming than in promoting the spirit of the Olympics," he said. "But, of course, I must choose my own path."

Chen only speaks in Mandarin. "I use my heart to communicate," he said smiling broadly, but he said it also helps that the prices are clearly marked in the supermarkets aisles where he prefers to do his shopping.

The bulk of his support has come from the Chinese communities he’s visited along his journey, but there’s been plenty of help from non-Chinese speakers too, he said.

Along the route east from California, drivers would slow down to read his signs on his rickshaw and then come back with food they prepared for him at home.

There have been a few times when he was pleasantly surprised to find a few dollars tucked into the cords tying down his cargo after returning from a bathroom break. He would then turn around and not find anyone to thank.

Police have been helpful, too, he said, providing him with an escort through traffic on several occasions. In Greece when he found himself on a dangerously busy highway, police cruisers rushed in to steer him to a safer road before he continued.

But not all law enforcement have been so friendly, he said. Somewhere in rural Illinois, he was discovered by a police officer after parking near what Chen believed was a desolate cornfield. Three more officers were called in, Chen was put in handcuffs, and his rickshaw was towed away.

Fortunately, the police only brought him to a nearby town, where they released him and returned his rickshaw. "These were the worst police I've ever met in America," he said. 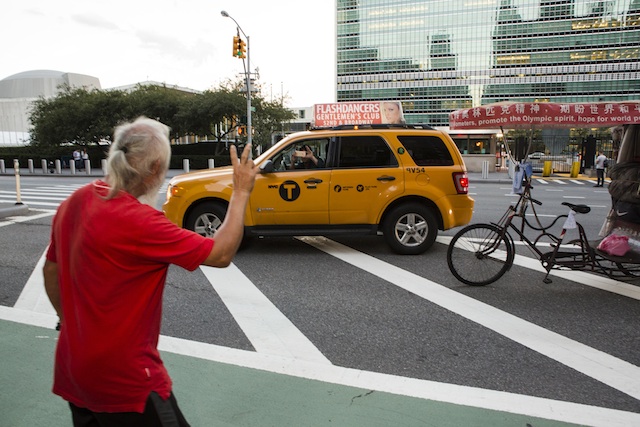 A cabbie asks for a photo (Jessica Lehrman / Gothamist)

While still parked on Forsyth next to the park, admirers from the neighborhood quietly watched as Chen transformed his rickshaw into the city's tiniest studio apartment—without plumbing, of course.

He abruptly left and then came back, complaining that the nearby park bathroom was locked.

"In China, public bathrooms are open all night," he announced and then continued to rearrange his gear, appearing not to notice the audience.

He meticulously stacked boxes of his cargo onto the foot of the carriage, opened a specially made hinged wooden board and placed it lengthwise in the space between the front and the back. A heavy folded blanket topped with a straw mat served as his mattress.

"For me it's the perfect height and the perfect width," he said with a smile as he rested his head near the portrait of Chairman Mao.

He took a few sips from a mason jar of "medicinal liquor"—erguotou baijiu, a strong distilled grain alcohol from China, which he infuses with goji berries and other herbs—and then said goodnight.

He had no worry of anyone harassing him while he slept. "There may be bad people here, but they are not bad to me," he said.

Three wheels poked out from under the vinyl, appearing very much like a vegetable vendor's cart buttoned up for the evening. "Formidable, formidable," the group of onlookers repeatedly whispered to one another in Fuzhounese as they walked away. 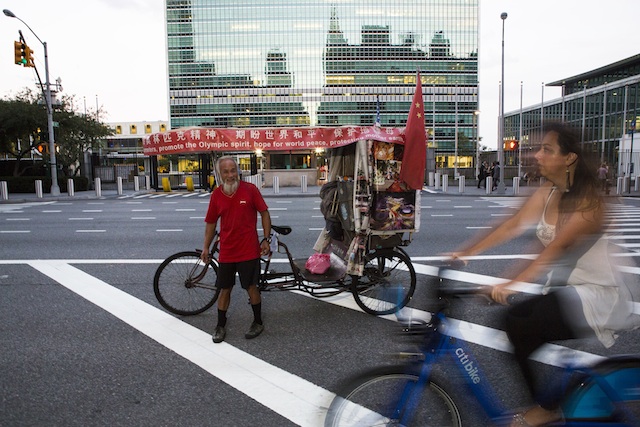 The journey from Chinatown to Flushing the next day took over 4 hours. Bicyclists riding the Queensboro Bridge that evening said they didn't know what to make of the bearded Chinese man pulling his vehicle across. Tor Hodenfield first cycled past, then decided to turn around and joined with another cyclist who started pushing the rickshaw from behind.

At the foot of the bridge, Hodenfield stopped to shake Chen's hands and accepted one of his Wuyeshen brand cigarettes.

"So I wanted to ask one thing: After all those years of travel, what advice do you have?" Hodenfield asked.

Just as Chen began to answer, Angel, 29, who tends bar at a gentleman's club in Manhattan, suddenly appeared and asked her own question: "Could you give me a ride?" She wasn't sure why Chen was there but figured his rickshaw would help her get to her destination a few blocks away. "Well it has wheels, doesn't it?" she insisted.

Chen continued with a response to the first question: "When presented with a challenge, we must forge ahead." 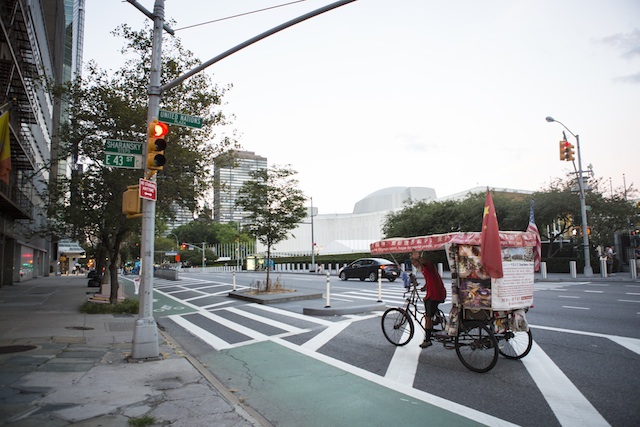 Off to Queens (Jessica Lehrman / Gothamist)

Chen expects to stay in New York for another week or so before moving on to Philadelphia and Washington, D.C. After Rio in 2016, he plans to travel to Tokyo in 2022, and then onward to Africa and Australia. "I want to spread the spirit of the Olympics to all of the continents of the world," he said.

Parked on the steps of the Queens Library in Flushing on a recent afternoon, Chen continued to receive a steady stream of admirers.

"The safe path in life will always have this or that kind of difficulty. In order to stay powerful, we must make the choice to overcome our difficulties, conquer our difficulties," Chen told the crowd.

"When you are afraid of everything—the wind, the snow, the rain, wild animals, bad people—then you're not going to go anywhere. The only place where you'll find absolute security from these is the grave!"

#Chen Guanming
#feats of strength
#formidable
#longform
#original
Do you know the scoop? Comment below or Send us a Tip